Neon lights have been popular for the majority of the last century and, despite a slight downfall when the cheaper alternative of LED lights gained popularity in the early 2000s, neon is a trend that just keeps on coming back to light up people’s lives. Having first exploded in popularity in the 1930s, neon lights today can be found in all sorts of places, but have found a special home in independent businesses; and there’s no independent business that does neon better than London’s God’s Own Junkyard.

“Being surrounded in colour improves peoples’ mood. People are always smiling. My dad, Chris, said it should be put on prescription”. Matthew Bracey is a British electrical lighting engineer, neon light artist and one of the directors of God’s Own Junkyard – the neon wonderland created by the Bracey family.

The family business ‘has salvaged signs and advertisements from destruction and restored them to their former glory’ since being founded by Matthew’s grandfather, Welshman Richard Bracey. 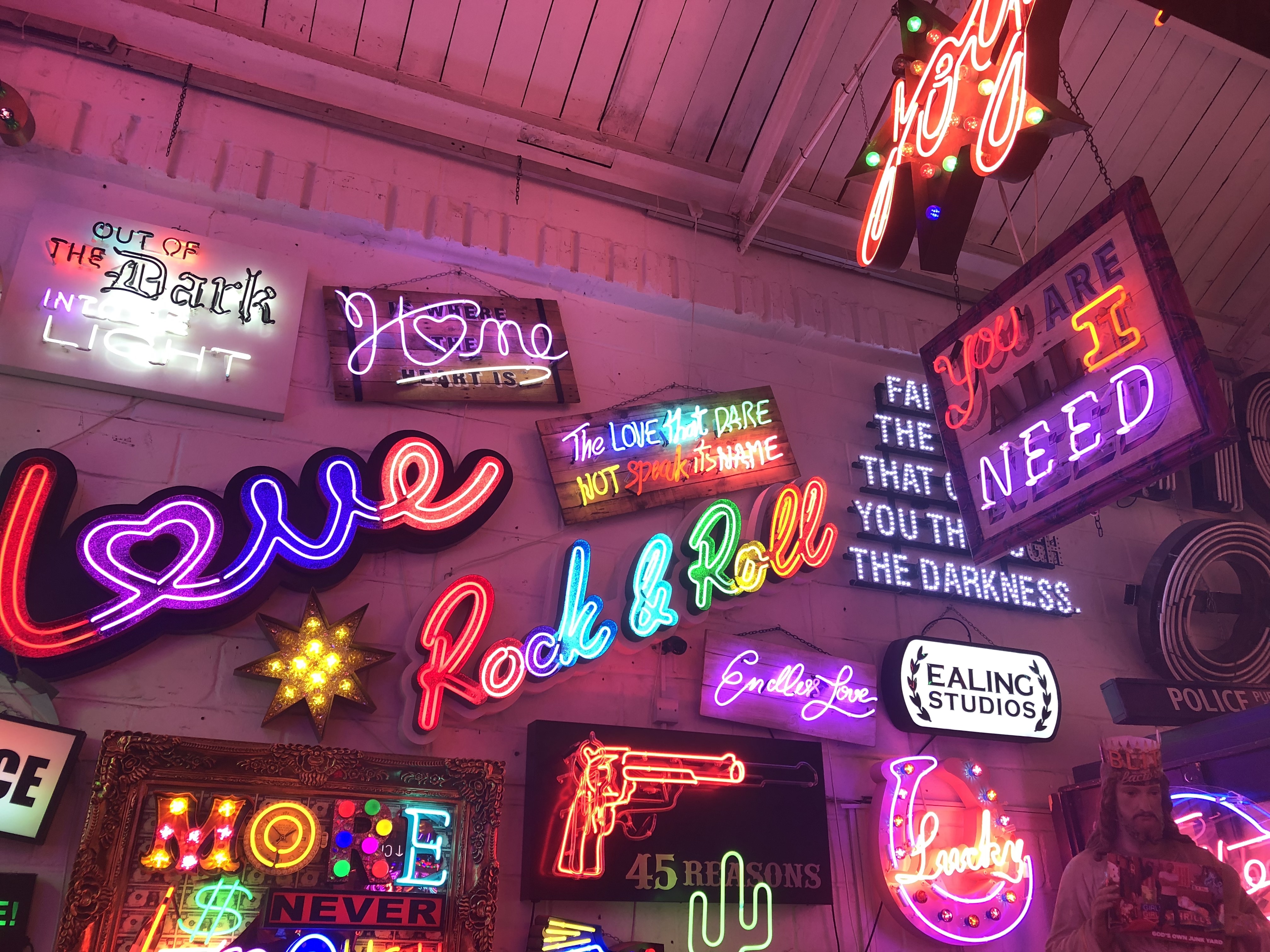 Richard left Wales for London and trained to be an electrician, starting work with a neon sign company and learning the trade before starting his own company Electro Signs in 1952. “You could say he came ‘out of the dark into the light’, which is one of the neon artworks Chris [Richard’s son, Matthew’s dad] made in his honour”, says 43-year-old Matthew.

In 1973, Matthew’s father, the late Chris Bracey (now widely known as ‘The Neon Man’), took over the family business.

“Every day, my dad walked through Soho and dreamed of how one day he would redesign the sex shops and strip clubs”, Matthew tells me. “Eventually, he had redesigned 90% of the sex establishments in Soho”.

As a talented artist and deal-maker, Chris managed to get a start on working in films, TV and commercials through a chance negotiation with Chris Townsend, the art director of the film Mona Lisa, which starred Bob Hoskins. “We still supply films, TV and commercials with neon signage to this very day”, says Matthew – with some of the biggest films having roots in God’s Own Junkyard including, Tomb Raider, James Bond, Mission Impossible and Tim Burton’s Charlie and the Chocolate Factory. 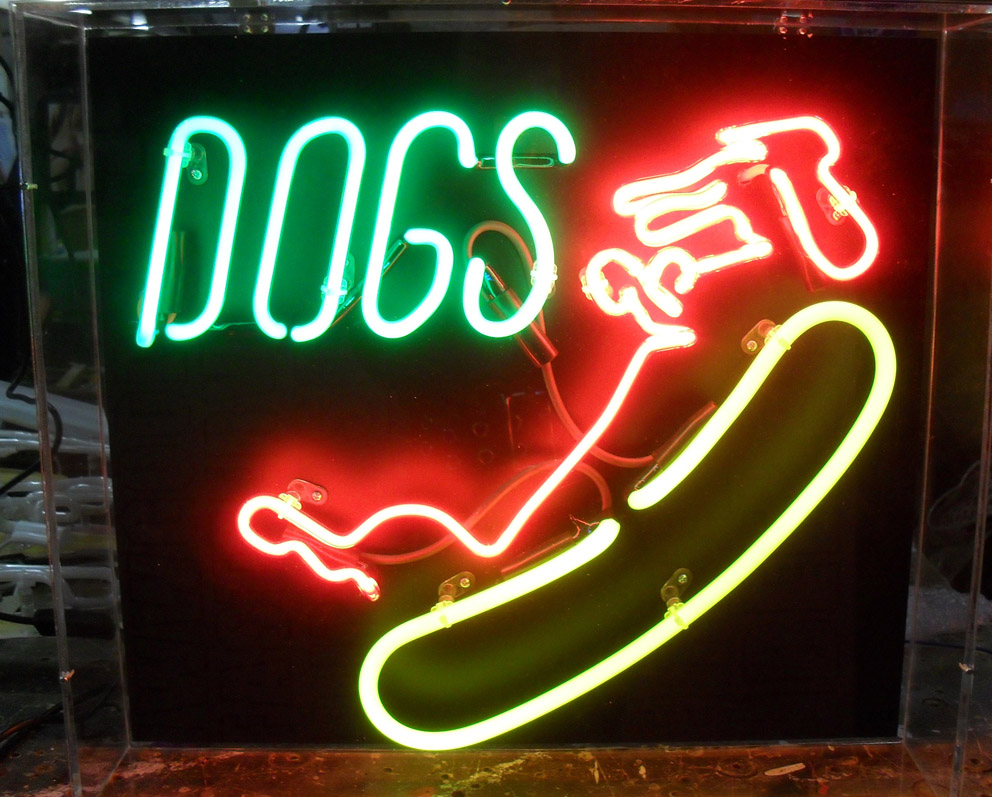 The Dogs neon sign was drawn and created by Chris Bracey’s own hand – and is one of Matthew’s favourites. Photo: Matthew Bracey

Matthew’s favourite neon sign that’s been used in films? “There are so many! But I think for me it’s the Dogs neon sign. This has been knocking around since the movie Judge Dredd in the early 90s – the Stallone original. It has been used in an untold number of movies. Plus, it was drawn and created by my dad’s own hand; it holds many movie memories”.

The Junkyard, in Walthamstow, displays a lot of Chris’ pieces – along with works by Matthew and other family members who have all worked in the business – “we have now hit fourth generation, which is great and so we are certainly the oldest neon sign company in London”. 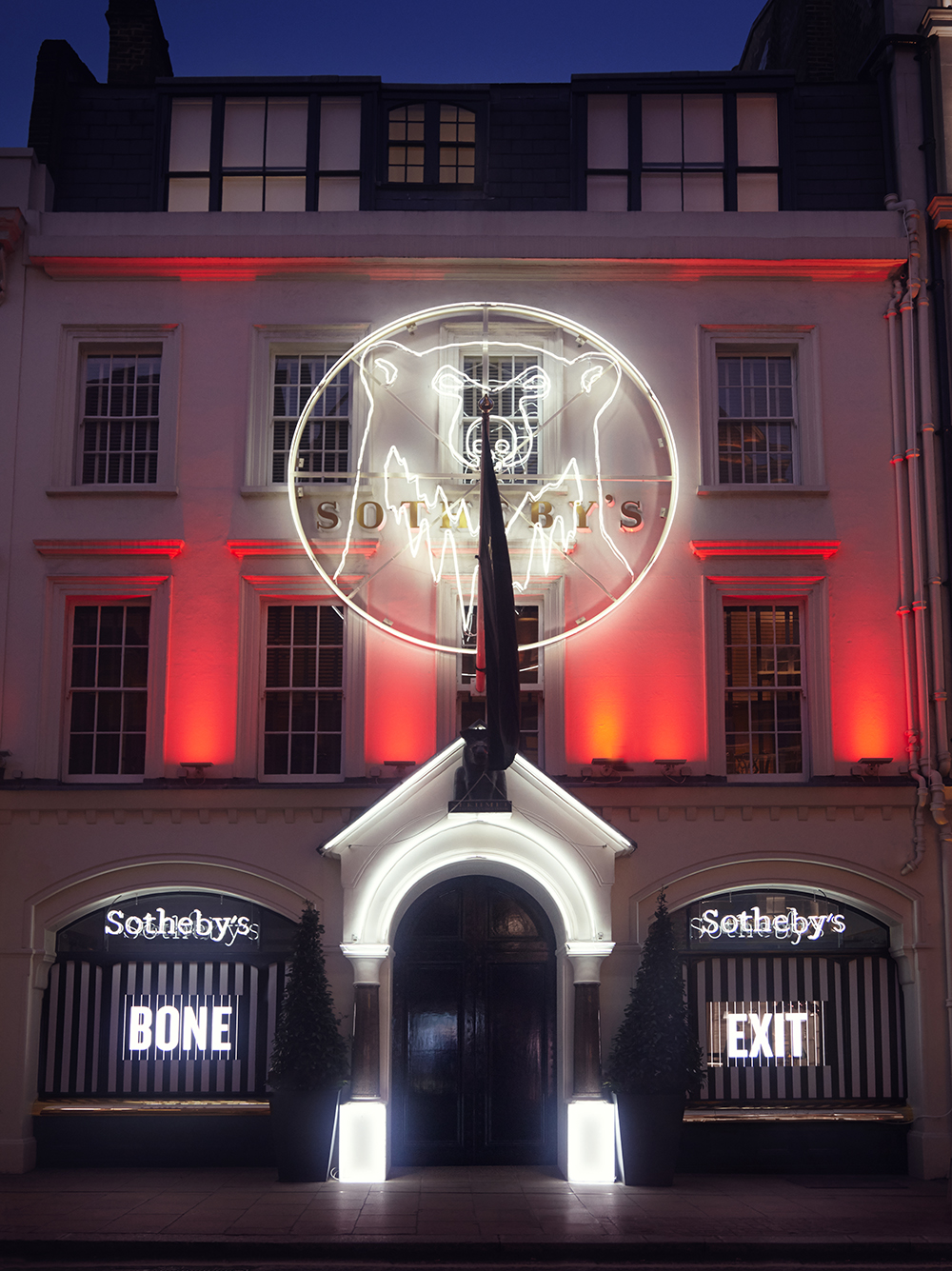 Matthew was tasked with putting Sotherbys’ first ever neon light on the front of the building in 2015. Photo: Matthew Bracey

Matthew has personally worked on an endless amount of projects and commissions but, somehow, manages to narrow his favourites down to five, starting with Sothebys – “I was tasked with putting the first ever neon sign on the front of the building in Bond Street in London in 2015. It was for the Bear Witness exhibition”. Also on the list is the Charlie and The Chocolate Factory commission of 2005, a commission from the Tate London, a 2005 project at Selfridges in London and, finally, Tomb Raider 2 with Angelina Jolie.

Today, God’s Own Junkyard is still a thriving family business, continuing the legacy of the legend that is Chris Bracey, displaying the collection to the public and holding ‘the largest collection of neon in Europe’ and attracting visitors from all over the globe. 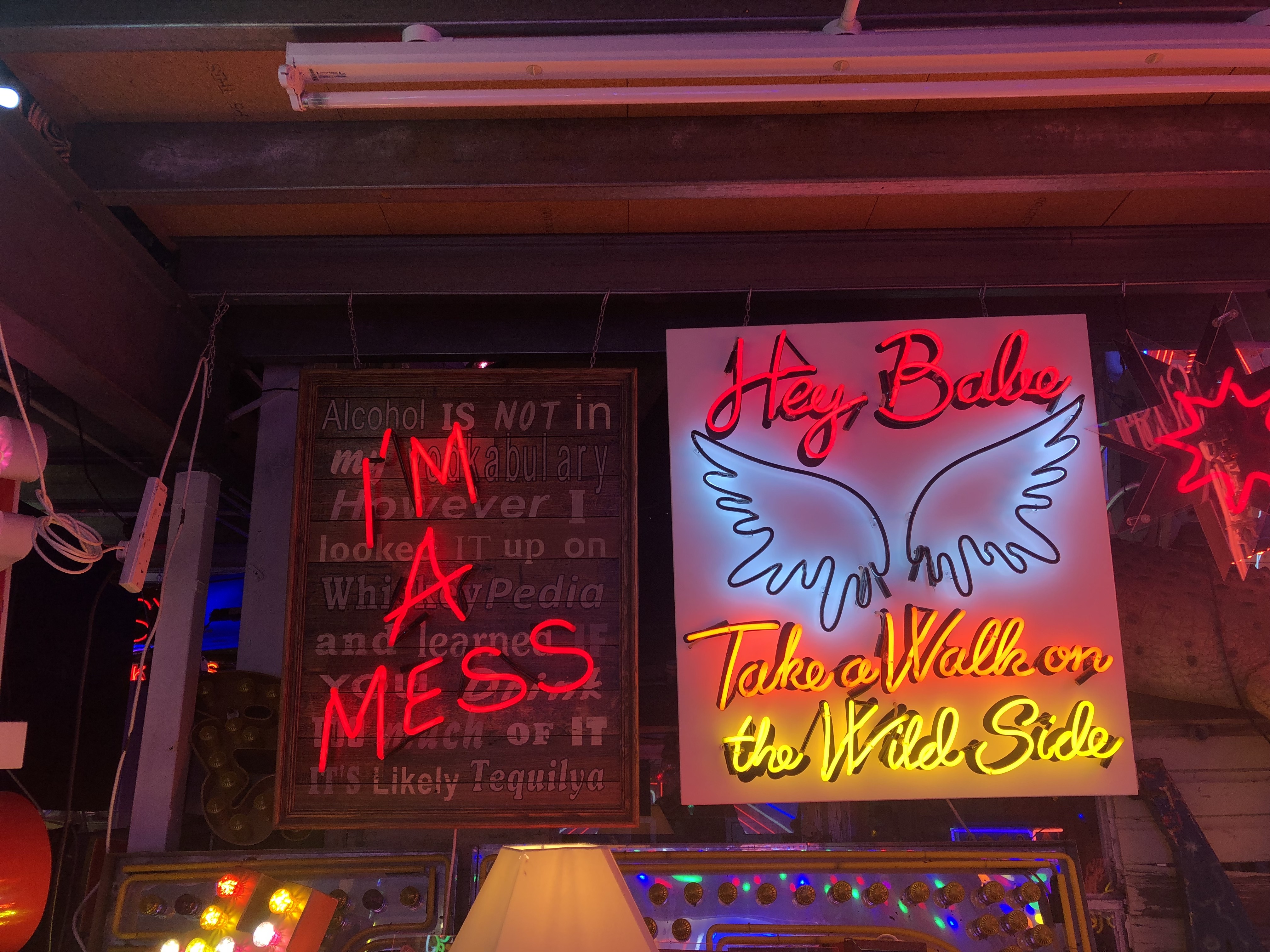 Why is God’s Own Junkyard so popular? “First of all, when God’s Own Junkyard was complete, my dad flicked on the switch and he smiled at everyone, with his hands in the air and said ‘this is what the inside of my head looks like!’. It was a moment of intense euphoria; everyone was in a trance of happiness. It was, and still is, the only place on Earth like it. It helps and inspires people to create amazing new ideas. It is somewhere for old, middle-aged and young people to all share the same enjoyment and happiness that a lot of places do not give”, says Matthew.

So, if you fancy a dose of what Matthew calls ‘hair-raising neon happiness’, head over to Walthamstow and visit God’s Own Junkyard. And, if you want to see or hear about any more of Matthew’s own work, he has some on display in various locations in London, including at the Hilton Savage Garden, Tape London, Pucci in Mayfair and, of course, the Bracey family’s very own God’s Own Junkyard.

Matthew Bracey is also releasing a book called STEEL DOGS in early February 2020, which he says, “talks a lot about the core family history, amongst other things and one crazy adventure with my dad”.

God’s Own Junkyard is closed to the public from Monday to Thursday.