Can you imagine a life without crisps and chips and creamy mash? Soon, we too  could be hit by the global ‘Chipocalypse’ like Japan and New Zealand. Or worse?

On 16 October, many Kiwis walked into supermarkets to find no crisps and warning signs of nationwide potato shortage.

A year of devastating rains and two serious floods in New Zealand have wiped out 20% of the country’s annual potato crop, and 30% of the “crisping” varieties for potato chips, took the biggest hit.

If it takes a #chipocalypse to make NZers serious about climate change, then so be it

However, this is not the first warning of global ‘chipeggedon’ as Japan too was struck by this bizarre crisis in summer 2017.

Crisps in Japan were on sale for six times their normal price, as the country’s main manufacturer Calbee, suspended sales due to country-wide potato shortage.

This led to a panic buying spree as Japan raided supermarkets and online platforms to secure their munchies. Bags that normally cost about 200 yen (£1.39) were going for more than 1,250 yen (£8.71) in online auctions, Bloomberg reported.

A VOL investigation has revealed that there has been a global shortage of potatoes at the heart of the potato processing industry and could affect other potato products and not just crisps. European markets like Belgium, Poland and Netherlands could be hit next with this crisis.

The US has recorded the contradictory situation and produced a large volume of good quality potatoes, which has resulted in lower prices. The Chinese production is the largest in the world, but the yield in 2016-17 is behind that of Europe and the US. 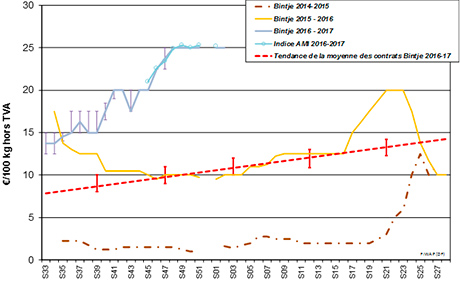 Production and Price chart for Bintje variety of potatoes in Belgium. Source: www.freshplaza.com 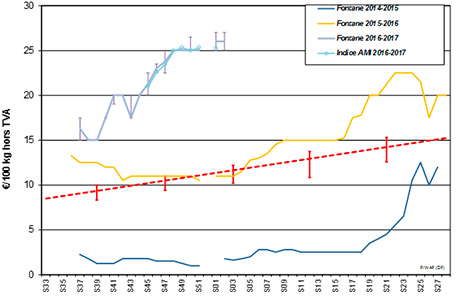 Production and Price chart for Fontane variety of potatoes in Belgium. Source: www.freshplaza.com

UPDATE: France battles with Croissant shortage as the country has a butter shortage due to declining milk production. Supermarkets shelves sit empty and the prices of croissants are on an ever rise in France.

There were enough terrible things happening now there's a French butter shortage like what even is the point anymore https://t.co/cmNRpDw2Ha

All of these point towards a greater problem at hand: Global food shortage due to climate change. A report by Gro Intelligence suggests that the world could run out of food by 2023.

Another report from the Global Harvest Initiative, states that with a world population expected to be at least 9 billion people in 2050, the world will run out of food if the food production output remains the same.

According to the Global Report on Food Crises 2017 by Food Security Information Network, South Sudan, Somalia, Yemen, and northeast Nigeria have been identified at risk of famine.

Crisps, Croissants, Chocolate and hungry mouths. What next?