When Jose Mourinho returns to South West London this weekend, it won’t just be the setting that is familiar.

The Portuguese manager is finding himself in a position he knows all too well, as he and his side struggle in the infamous Mourinho third season.

It has become a running joke for Mourinho, who despite denial, looks to be overseeing yet another burnout as a result of his short term orientated management.

A fortnight ago, his demise looked a formality. Just days after The Mirror reported his time was up, he and his players found themselves two down against a struggling Newcastle side. But for a resurgent second half, it would have been five games in a row without a win in all competitions.

Mourinho is still in the hot seat, and is looking to cash in on the inspired nature of his team’s fightback in their last game, but they come up against a Chelsea side playing some of the best football in the division.

Maurizio Sarri has ripped up the Chelsea blueprint of pragmatism and ruthless rigidness to create a more expressive style of football at Stamford Bridge. As a result, they’ve won six out of eight league games, drawing the other two, and sit second only on goal difference with 20 points.

Sarri’s side are pressing more than any other team, according to Opta, and have completed more forward passes than than any other side bar Guardiola’s Manchester City. This has allowed all of Chelsea’s attacking players to flourish. 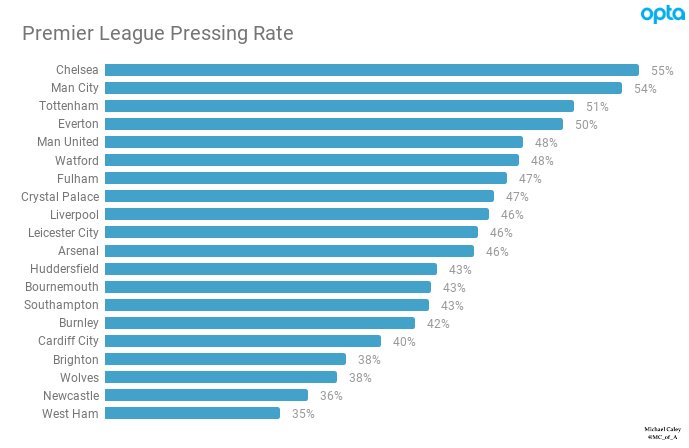 Barkley is unrecognisable from the desperately inconsistent figure he was back at Everton and Jorginho’s induction to English football has been seamless.

No one has benefited more than Eden Hazard though. The Belgian is finally justifying his obvious talent with the goals and assists required to call yourself one of the best.

He still overtly flirts with the idea of a move to Real Madrid, and even admitted he would like to play for Mourinho again, but Chelsea fans will still be relieved that they haven’t already lost their star man, when in the summer it looked so likely.

As for this Saturday, the hosts aren’t under too much scrutiny. Anything less than a win would be disappointing for Chelsea, but far from pressing as Sarri continues to put emphasis on progress rather than results. A win however would further reiterate their credentials as genuine title contenders.

In the away dugout, Mourinho will be looking to prevent a fifth straight loss at The Bridge since leaving Chelsea in 2015. It’s not a must win game for the Red Devils, but given they are already seven points off the top, the height of expectation that comes with this fixture anyway will be amplified even higher. A defeat for United could be the catalyst for an ugly, dismay ridden season that would surely see Jose out the door.