The fashion and textile department at Central Saint Martins College, University of the Arts London recently reposted a student group project on their official Instagram story. Shortly after the post, the university met with immediate backlash as many netizens were quick to point out their post were offensive to the Chinese student body and were accused of being “suspected of having racial discrimination and prejudicial content”.The posts were deleted a few hours after receiving these criticisms.

UAL published two official apologies, according to the Business Of Fashion. Since then, the student who was responsible for the artwork has recently apologized on her personal Instagram.

What were the posts about?

According to Central Saint Martins (CSM), the posts were related to a group project that was set for a foundation year of the fashion and textile department at the university. Student were to design a manifesto on topics they were interested in and anti-fast fashion was chosen as the main theme. The pictures below are the Instagram posts that incited public outrage: 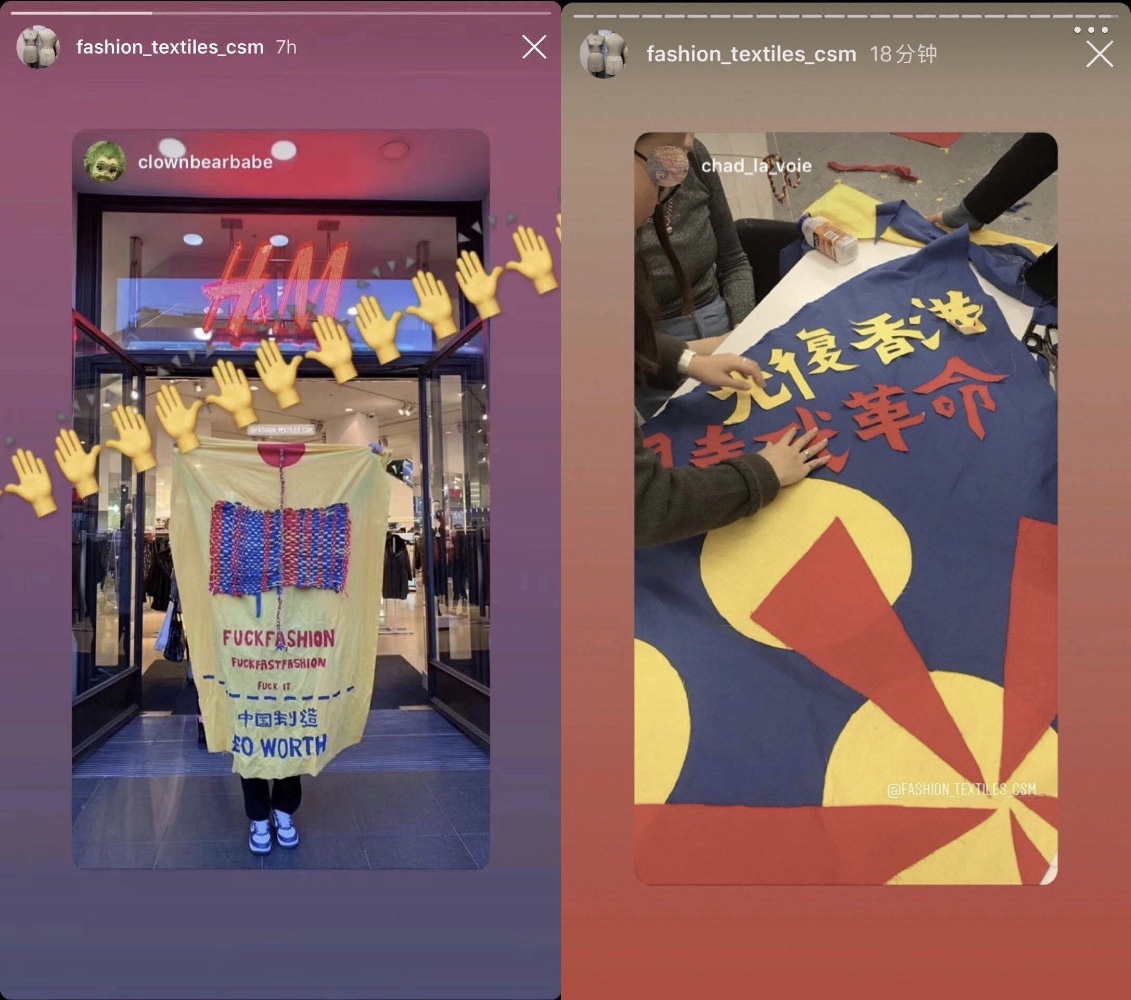 On Picture 1, it shows a completed banner that is held up by a student. On the banner, a slogan states “fxxk fast fashion”. There is a weaved red and blue design and Chinese characters that translates as “Made in China”. On Picture 2, it shows a group of students working on designing the Chinese slogan.

What is the meaning of the banner and how was it interpreted?

The slogan in Picture 2 “光复香港，时代革命“（Liberate Hong Kong, the revolution of our times）is a social movement slogan of Hong Kong. It was first mentioned in 2016, by the former spokesman of Hong Kong Indigenous, Edward Leung.

In the ongoing Hong Kong protests, this slogan was used by many pro-Hong Kong supporters. According to the New York Times Chinese website, this slogan represents a significant disassociation of national identities with 75% of people from Hong Kong considering themselves as “Hong Kongnese” and preferring to use this term over “Chinese”, “Hong Kong people in China,” or “Chinese in Hong Kong.” 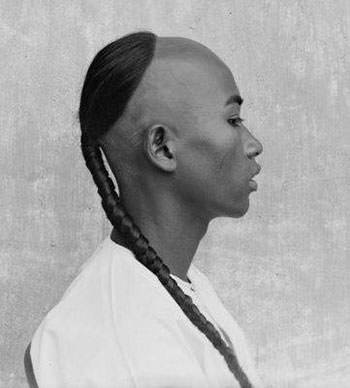 The queue (photo from Quora)

On Picture 1, the red and blue weaved design and long braids as well as “Made in China” slogan are recognized by many Chinese people as historical references to the hairstyles and flags of the late Chinese Qing Dynasty. From which, many Chinese people suffered from both domestic and foreign problems.

A Chinese student commented on Weibo , a Chinese social media platform), “the queue hairstyle is a typical image of the Yellow Peril (an extreme nationalism that promotes anti-Asian), promoting anti-Asian fears, racial discrimination that is well known in the Western world.”

According to students from the CSM foundation class, the other four students in the group thought the written Chinese text were “pretty cool on the banner” but were unaware of the cultural meaning and relevance of it.

In the apology of the student who idealized the project, she contended that the meaning of the content of the banner was misconstrued. “The colours were decided by the class, and that braid was a string that you tie a tag onto a garment with, and the weaving is a barcode, and the rest is the clothing information and a price at the bottom.”

VOL also received comments from people of various backgrounds of their reaction to the post. People stated: “This may be just to express their dissatisfaction with fast fashion, as it really deserves our concern. This industry dominates the poor working labour force.”

However, other people argued:  “Besides ‘Made in China’, there is no national flag and nor English translation. In this way, for the audience that does not understand will think that this is pure ‘anti-fast fashion’; for Chinese people who respond will be considered as an ‘overreaction’-this is the designer’s shady action.”

“As a student, I understand that everyone needs to do projects. However, did this student’s conclusion on ‘made in china equals zero value’ based on facts and researches? Are there any reliable websites and data support?”

“An educational institution should have a respectful and equal attitude when posting social media content with personal positions. “

What VOL thinks of the controversial banner and Instagram story?

Individuals have the right of expression to demonstrate their political views through their artwork. The student who idealized the project posted a photo of the banner on her personal social media account. This should be respected as she has a right to express her political views on her social media account. Furthermore, CSM was able to respond to the criticism of the post swiftly, as they issued an apology and deleted the post on the same day (see below) 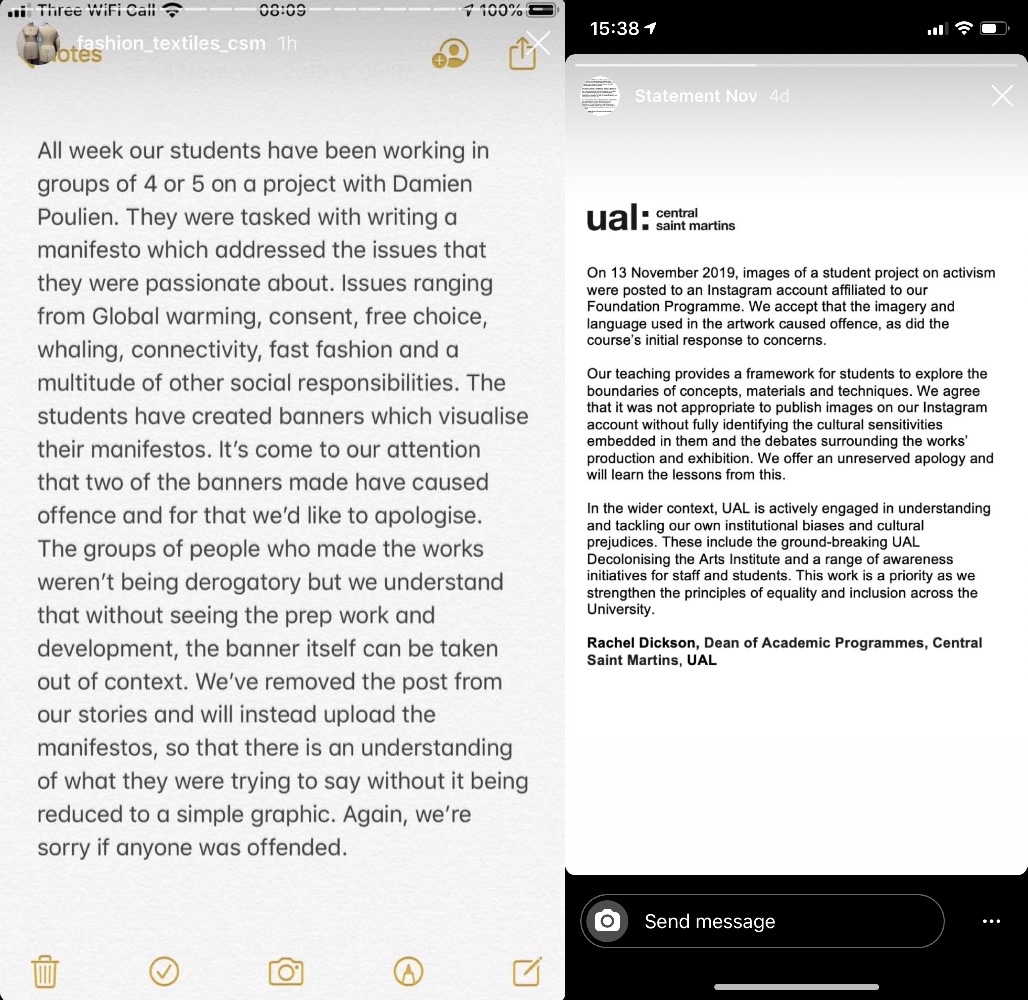 However, the slogan which states “Made in China” equals fast fashion is a generalized stereotype which can lead to prejudices and discrimination. According to the figures shown in the Nofashion website, Bangladesh is the leading supplier of fast fashion in 2016. Fast fashion itself isn’t the responsibility of one country and blaming one country for such a global issue is detrimental to educating people on the reality of fast fashion as a problem that should be burdened by all consumers of fast fashion as well as suppliers from different continents.

Leading on from this, the project does not encourage students to create truly sustainable and low-exploitation goods. As a leading art education institution, it is CSM’s responsibility to guide students to explore a variety of sustainable materials to create quality designs. Also, it is irresponsible that an official social media account such as CSM’s will repost anything before fully considering the content of the posts and checking whether it is offensive.

The student and her classmates have declined further interviews with VOL.