What does it take to get to the top? A group of young adult’s journey to the largest robotics competition in the world

On the white and green striped wall across from our tiny, cramped, picnic table sits a clear display filled with freshly polished brass and silver. In that cage lays this team’s key to success.

When two of them spotted it, the creases in their foreheads deepened and the corners of their mouths lowered. The other’s eyes were filled with the reflection of the glistering trophies and hope. This is what could make or break the rest of their competition. This giant piece of tin determines their success and future endeavors.

Are these people crazy? Slightly sexist? Borderline autistic? Maybe. But one thing is for sure, they are desperate to travel back to last April- a time which many of them describe as the best experience of their life.

The roaring crowds. The blinding strobe lights capable of dulling your senses. The sound of metal on metal. The craziness of the largest robotics competition in the world: FIRST. 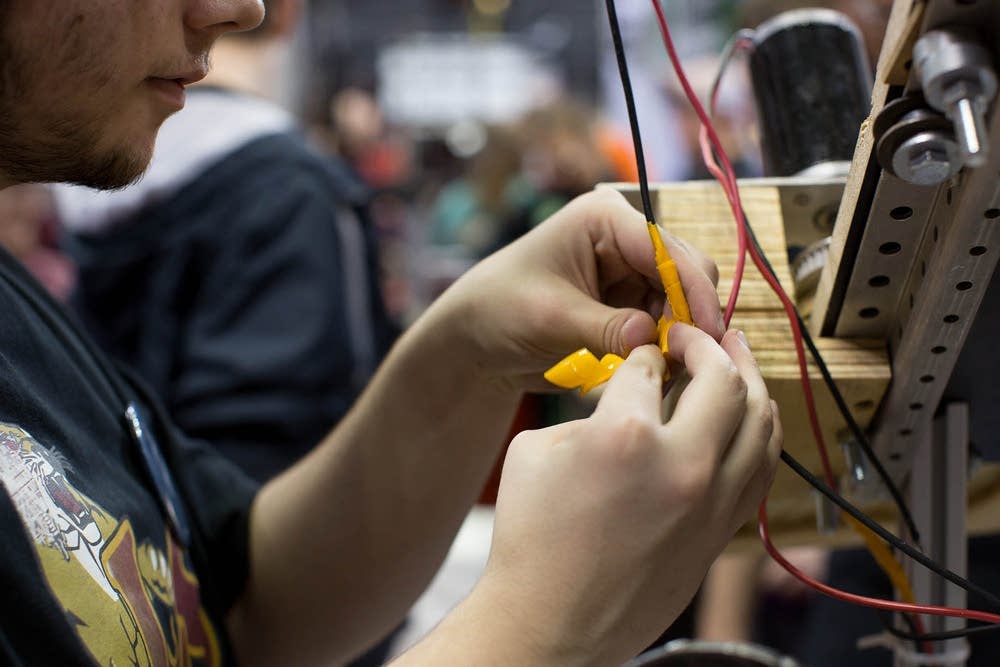 Every year, 20,000 adults from countries all over the world travel to St. Louis to compete in the FIRST Robotics Competition Championship. The road to FIRST is a long, treacherous, and rewarding path. That is if you make it.

Robotics may sound nerdy, but it’s snatched the attention of a new generation of programmers, engineers, innovators, and problem-solvers powering the exhibition of building incredibly powerful engineering tools.

Stuart Sharma sat on the edge of his seat picking at the numb, pinkened flesh around his nail beds. “In order to even get into FIRST, we have to heavily train and qualify for the competition.”

SWAT is their key- an international competition providing an environment where you forced to work under tight time restraints with limited resources and strict rules. “We’ve never been to this competition, and we’re unsure of what to expect, but what we do know is that there are huge sponsors here,” says Sharma.

Over the course of six weeks, teams are challenged to create CAD models of their robots, build their robots from the ground up, and, with enough luck, test their robots’ abilities to work and thrive in a real-life setting.

At the end of the six-week timeframe, all robots are “bagged and tagged”- encased in a clear bag- and unable to be touched or worked on until competition day. 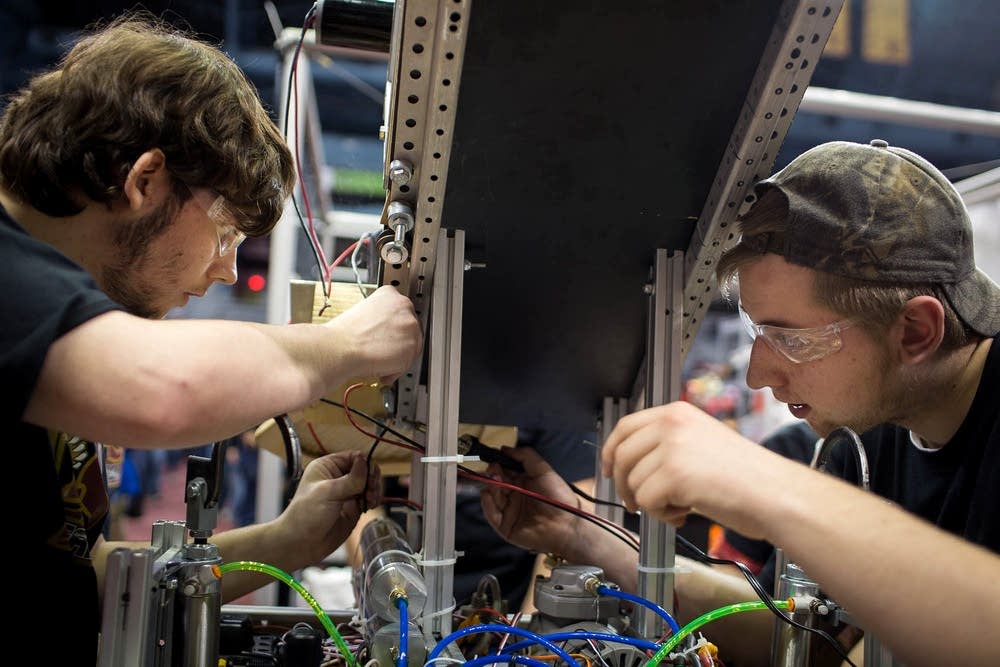 Week one: an empty computer screen with an empty grid and an empty mind from little motivation and too few ideas. “The hardest part is always the beginning… determining your vision, fitting the competition requirements and rules, and the motivation to actually stay on track,” says team captain Karan VanMetre.

Successfully navigating AutoCAD LT is their key to FIRST. One slip up- one improperly calculated wheel and the whole operation has failed. “Everyone always wants to skip straight to the fun part- the design and testing.

Nobody ever has the proper motivation to get through the nitty and the gritty,” says VanMetre. Seven days have past and Sharma is concerned. A week later and he is still staring at an empty computer screen.

Week two: as time runs out, it starts to don on the team just how much of a time constraint they are under. There is no time to waste. “Any parts we order will take at least five days to arrive by post,” says VanMetre, “we can’t afford to begin building on week four.” One all-nighter in and the screen is still blank. 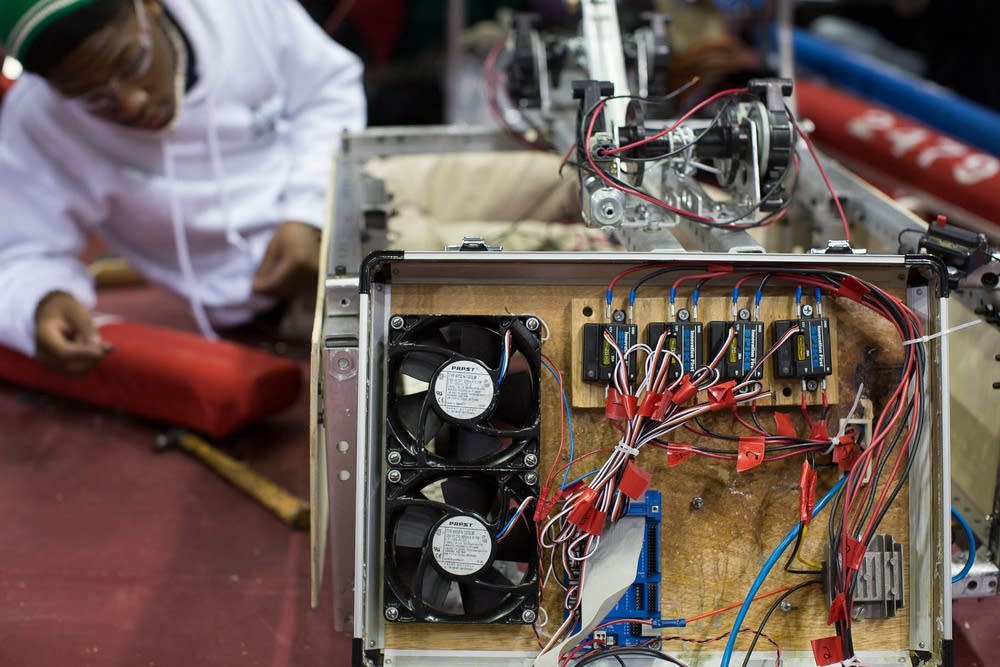 On the second all-nighter, as Sharma takes a bite of his Hawaiian pizza slice, an idea hits him. The ball is rolling and the CAD model is in full swing.

Week three: a pile of parts and lots of debate. As the small team of five sat in a circle of bits and pieces, arguments arouse- was focusing on a waterproof basis the most important part or was it the robot’s ability to shoot a basket?

The scatter-minded individuals couldn’t seem to keep their minds on one single task. Conversations were frequent and rarely directed at the task. “You know, I can solve a Megaminx Dodecahedron Rubix cube in a minute- I’m on my way to breaking the record.” “Why is the surface of ice wet when it’s properties are dry?” “Dude, my mum made the best brownies last night- I ate like five of them.”

Nonetheless, as time ticked by, the sound of endless, intelligent bickering became fewer and less frequent. “It takes a good leader to lead a team like this,” says Rosa Lopez, the youngest team member at the age of 17, “ Karan always keeps us on track.” 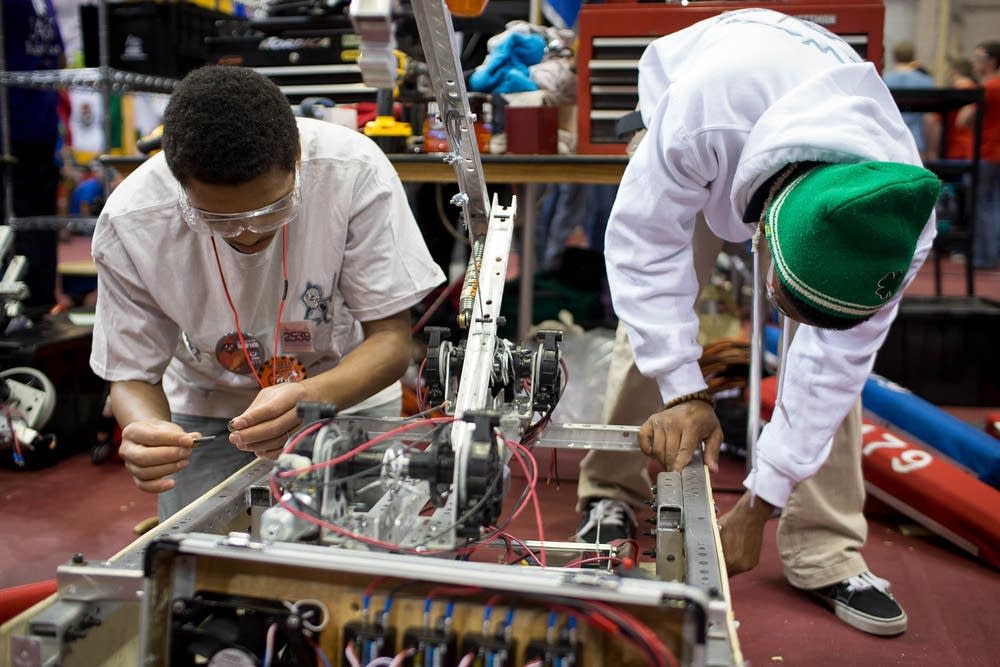 With 3 hours to spare, the robot is finally on its feet. “The proudest moment in the entire world is seeing your creation in the flesh…. nothing is more gratifying than watching it be built from the ground up,” says Lopez.

As quickly as it is built, it is bagged up and placed to the side. To touch it would be against the rules and the team would promptly be disqualified. The anxiety starts to kick in. In one week’s time, the team will be on a Megabus and reunited once again.