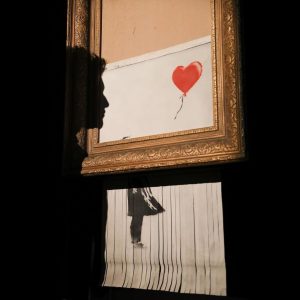 Banksy used his Instagram account to enlighten his fans as to what happened during Sotheby’s auction when one of his paintings, Girl with a Balloon, got sliced by a shredder the minute the hammer went down confirming the sale for £1m.

The anonymous artist revealed in a video that “a few years ago I secretly built a shredder into a painting in case it was ever put up for auction.” He also defended the prank with a quote from Picasso by claiming that “The urge to destroy is also a creative urge.”

The video shows a hooded character installing blades into the sides of the frame. Then it cuts to the auction itself when the final bid is accepted with the slam of an auction hammer followed by the beeping sound of the shredder.

The artist had also confirmed that the shredding did not go fully according to plan. The piece had only been shredded in two-thirds leaving the top part unharmed. The caption in the video says: “In rehearsals, it worked every time.”

The iconic artist celebrated his prank on Instagram by posting a picture of the horrified and shocked crowd watching the painting get destroyed with the caption: “Going, going, gone…”.

According to Sotheby’s the buyer is a European woman who does not want to be named but is willing to go through with the purchase despite the state of the painting. She said: “At first I was shocked, but then I realised I would end up with my own piece of art history.”

Pest Control, a firm acting on behalf of Banksy renamed the painting to Love is in the Bin. Solidifying it as the first artwork in history to have been created live during an auction.