Mesut Ozil, one of the Arsenals most influential players in the last 7 years, woke up on a Thursday morning looking to give his all for his team until he was met with a message which confirmed his future un-involvement with the squad. Is this a way a highest-earning player should be treated?

Seven months ago was the last time the German set foot on the pitch for Arsenal. At the time, the club had just experienced a change in manager to Spanish coach Mikel Arteta and things were looking up for a team struggling through a rough patch. The 2014 world cup winner was an influential player in the team at the time creating more chances than any other player in the 25 man squad.

Fast forward to now, the landscape of the situation has dramatically changed. The 25th of June was the last time Mesut Ozil was named in a matchday squad and since then his involvement in the club has drifted behind the scenes. Many fans and pundits have questioned his disappearance with passionate supporters hinting at his exile being due to his high wages.

In 2018, before Arsene Wenger departed, the midfielder was handed a lucrative contract extension which saw his wage increase to £350,000 a week, the most of any player – but is this the player’s fault for the treatment he receives?

Since starting in March, the coronavirus pandemic has had a huge impact on British sport, with football being hit severely. The league barely made it through with matches having to be played behind closed doors, supporters being confined to their homes losing the essential reasons sports are played stadiums – for the atmosphere.

Despite how much the sport suffers as a whole, players suffer even more. Players who were picking up momentum before the pandemic are forced to reset, managers who’s teams were just beginning to gel are forced to re-think their tactics. Despite this, some players suffered more than others – those with big contracts.

In the last couple years, many Premier league ‘stars’ have been handed huge deals. French midfielder Paul pogba who was brought back to Manchester United from Juventus, Alexis Sanchez who made the switch from Arsenal to Manchester United for a huge sum of £391,000 a week and the North London villain Mesut Ozil. The one issue these players face in common is the demonization from the club and fans whenever they deliver a bad performance.

The trend with players who sign big contracts isn’t hard to miss. High profile players tend to fall off their peak the minute they have put pen to paper. Make no mistake about it, Mesut Ozil is one of these players, with recent form providing evidence for this analysis. Since putting pen to paperback in 2018, Mesut Ozil has only registered 4 assists for the Gunners despite his performances and assists being the exact reason he was awarded the contract.

Arsenal finished 6th the season Ozil was awarded his contract, the north London sides second finish outside the top four in the last 2 years. Before 2016, Arsenal had never finished outside the top four under Manager Arsene Wenger. Was this complacency from the player to live up to the expectations that were set for him or complacency by the club giving a contract to a player who was clearly declining in form?

Mesut Ozil was given a contract when his form was clearly declining. One of the aspects which need to be looked at is how the club manages its players. The club handed the German a contract of such a large number for three years expecting the player to deliver at top form for the remainder of those three years.

Club vs The fans – ‘battle of the voices’

One thing both parties no for certain is the player doesn’t choose his wage, the club does. When the player signs the contract, he isn’t signing up for alienation whenever he puts in a big performance. Arsene Wenger, the coach who gave him the contract, believe that this was the cheapest option.

“First of all, when we let a player go we have to buy somebody of the same calibre. And if you add the transfer needed — the wages [for the new player] will be similar, but on top of that, we have to pay a transfer [fee]. So overall, Ozil was for us the cheapest option,” Wenger said.

Players are not only given huge contracts to produce quality on the pitch, but they are also placed as deterrents to other clubs from coming in for their star players, Mesut Ozil was Arsenal’s star player.

When it comes to players with big contracts, it is no surprise that they are treated differently than everyone else at the club. Looking back at the history of Arsenal and the big players who have come and gone, Mesut Ozil stands out as the one player who kept his loyalty to the club despite the hardships they were experiencing – a loyalty which isn’t being reciprocated.

Fans are important to the club and it’s essential their voices are heard on the situation such as this one. Several have come in defence of the German, looking towards the board and there poor management of players over the last few years. One fan, in particular, was sure “he was set up for failure” when he signed the contract.

Shortly after the fans heard of the dismal of their most loyal players, cries of outrage were seen dispersing all over Twitter. Fans were not happy with the treatment of Ozil regardless of how much money he receives.

“In my opinion, Ozil is one of the most loyal players to come to this club”, Bailey, 20, an Arsenal fan told Voice of London. “He has been here since 2013, the day he transferred from Real Madrid to us was one of the best days of my life.

“I feel as though when the club handed him that large contract back In 2018, he was set up for failure. He has been used a scapegoat by the board as a reason for the team’s bad performances. The treatment we see him receive from the board is unfair and that’s no way to treat someone who has led us to many trophies since his arrival. He’s an Arsenal legend” 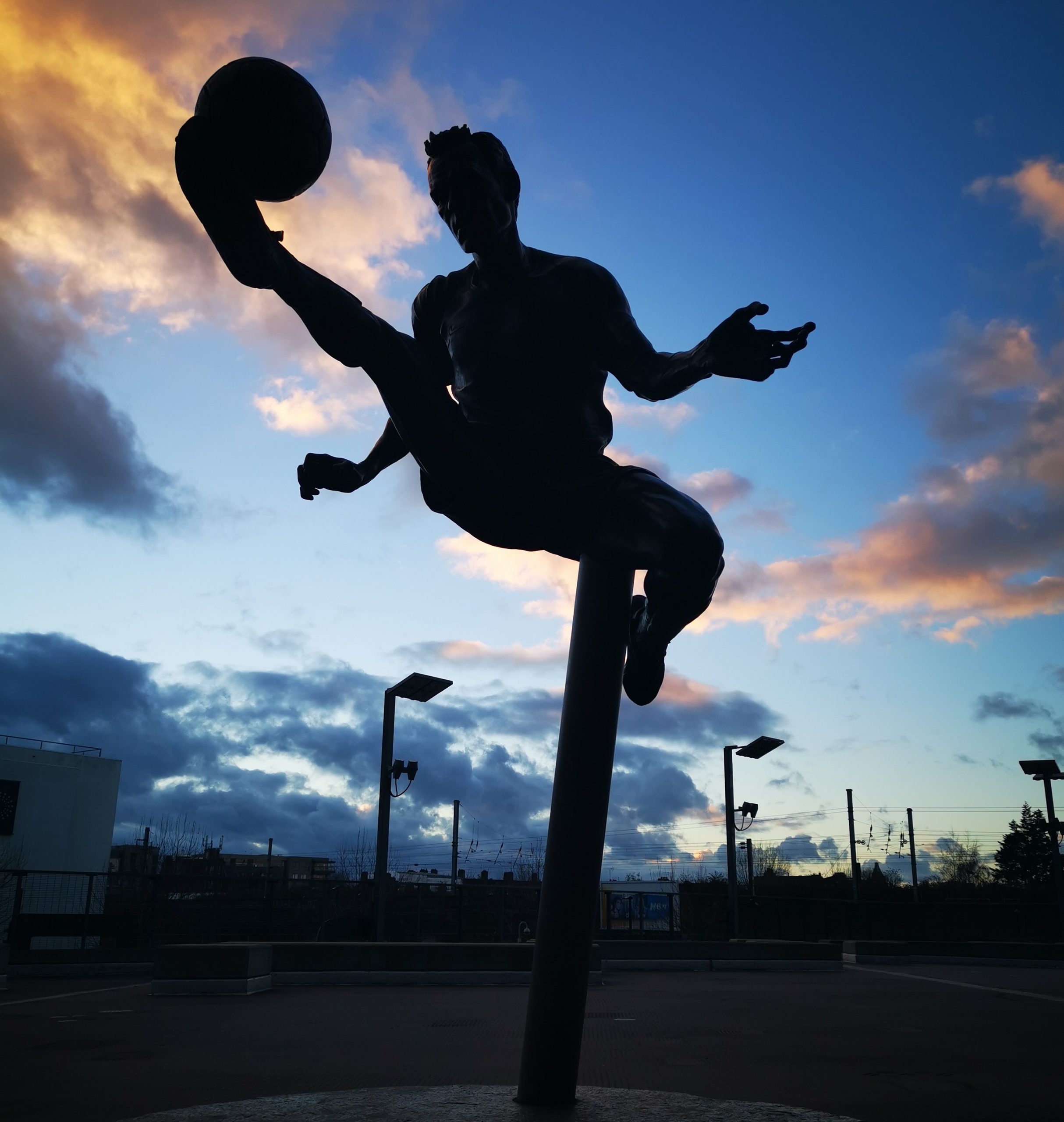 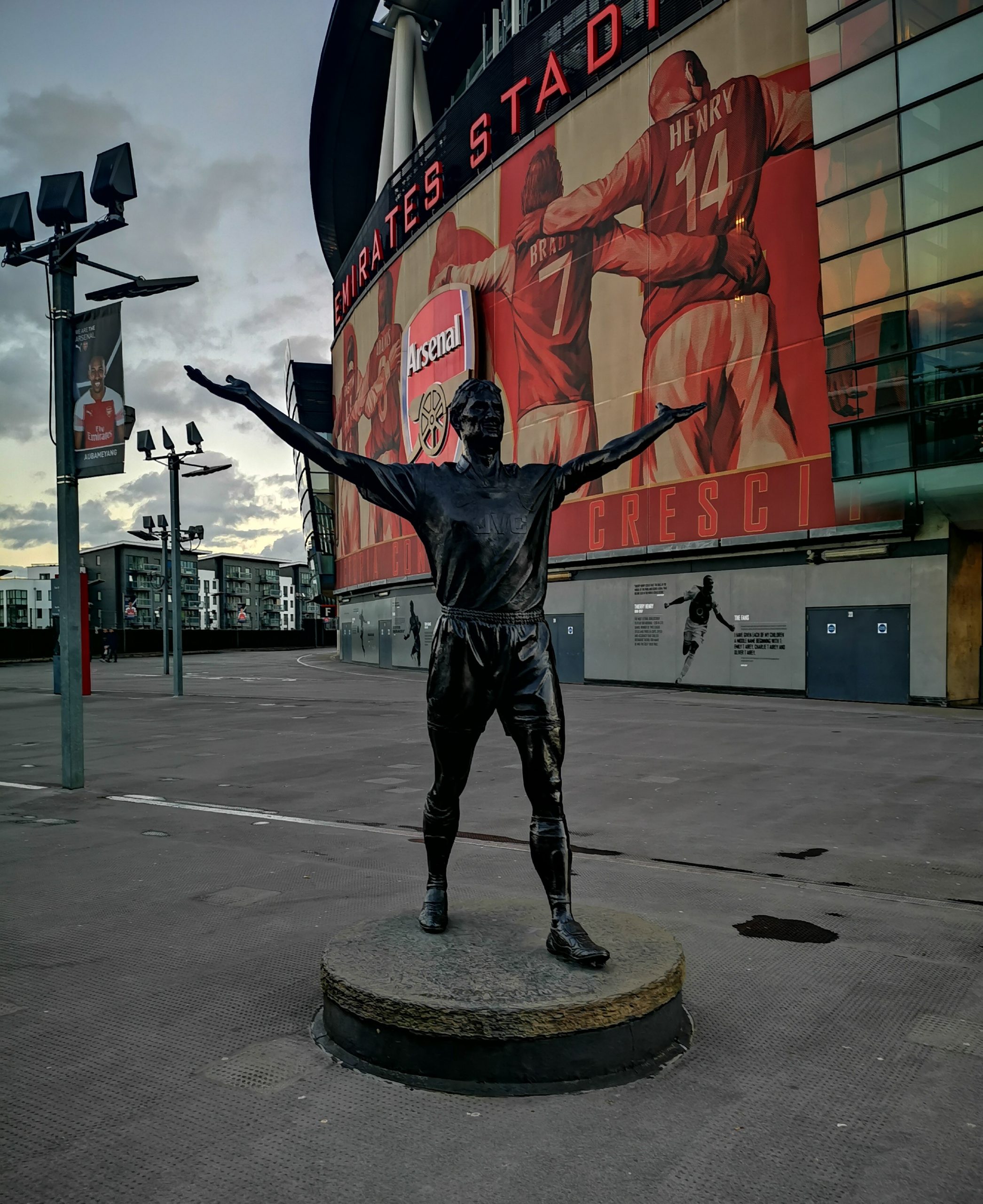 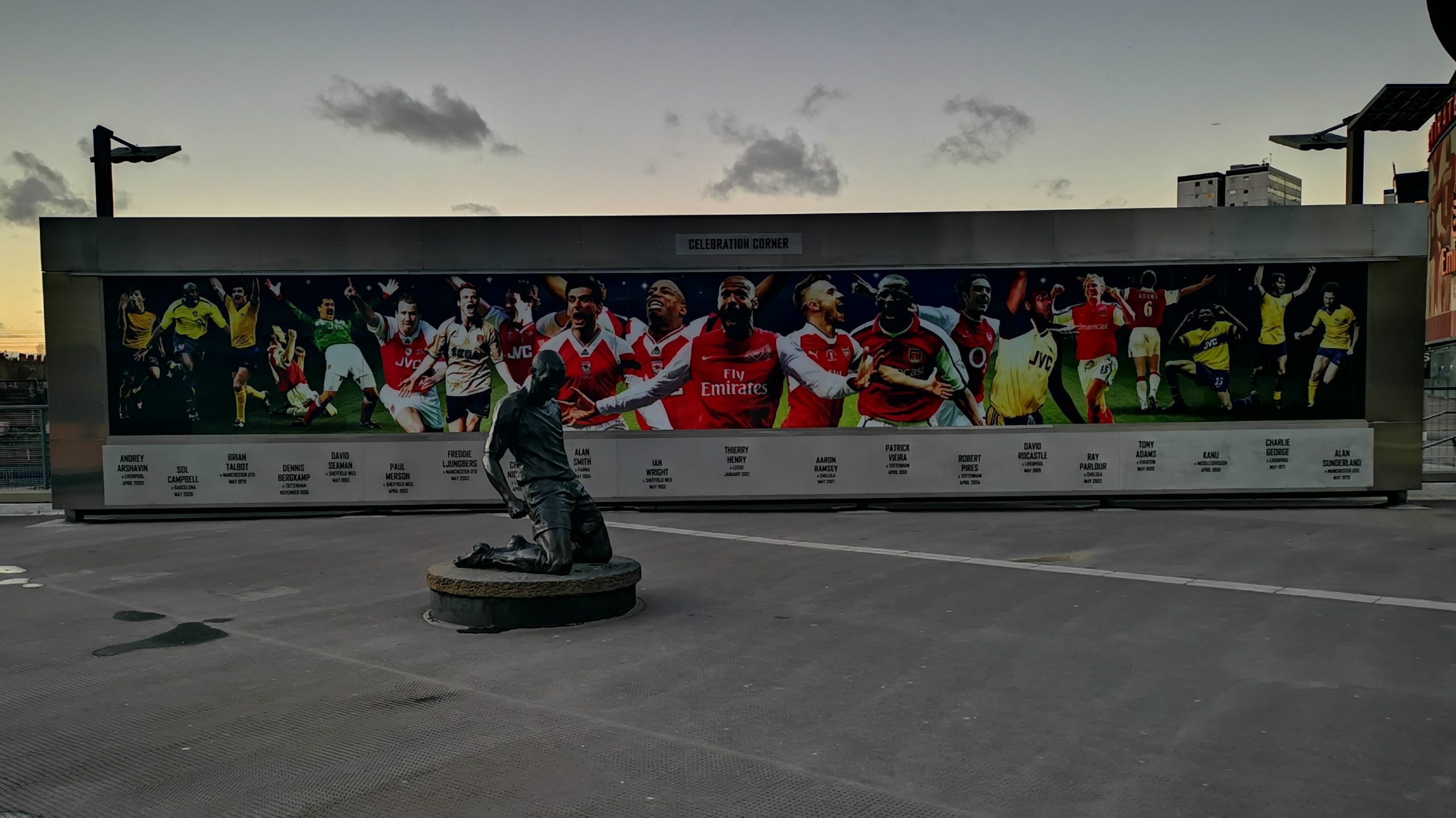 The situation has become so dire that fans have started petitions to have the midfielder re-admitted into the squad for the remainder of the season once the January transfer window closes.

There are always two sides to a coin, with many fans siding with the board and the treatment of their highest earner.

“From where I stand, I want Mesut Ozil out of my club as soon as possible”, Daniel, 21, told Voice of London.  “He is the highest-paid player collecting £350k-per-week and received a recent £8 million loyalty bonus to not even make the team?

“From what I can see, the board is doing their best and I’m right behind them because recent seasons show he’s not good enough to play for Arsenal anymore.”

he isnt good enough either way and should be treated like any player in the squad! same happened with Sokratis (left out of PL/UEL squads) but he hasnt said anything… if he cared about the club, like he say he does, he’d have left already – had two offers in the summer. 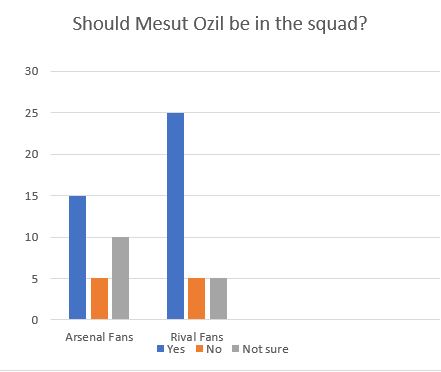 Arsenal fans were asked whether Mesut Ozil should be in the squad Source: Michael Patcha

Where did it all go wrong for Ozil?

Ozil’s career at the club began to take a hit following the departure of Arsene Wenger in 2018, the head coach who brought him to the Emirates. 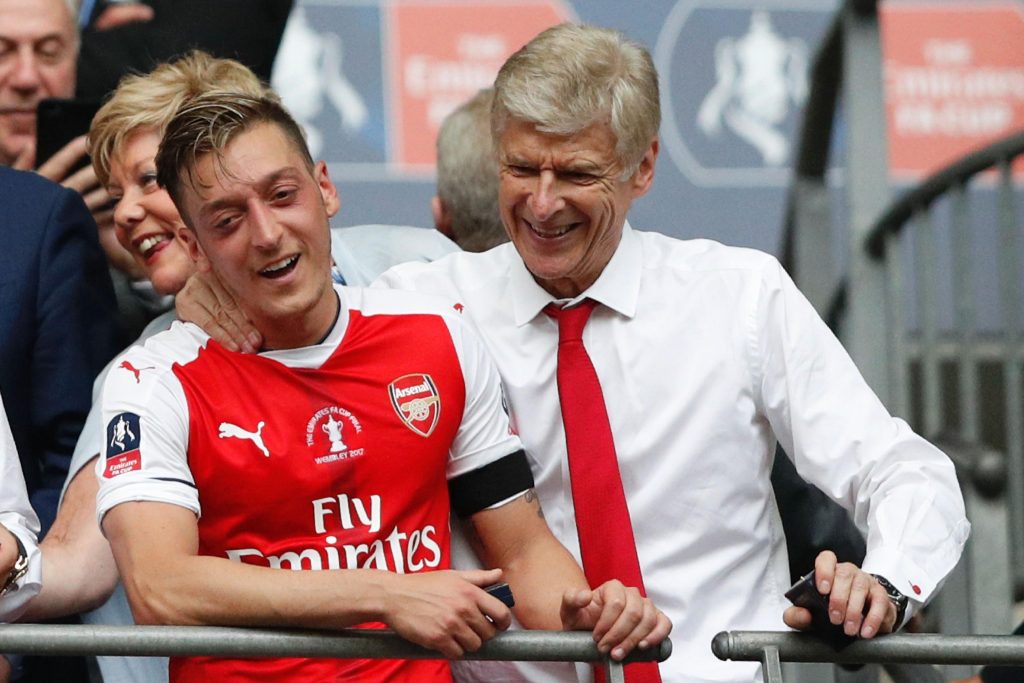 Ozil flourished in the No. 10 roles under Wenger, who suited the French coach’s attacking system.

But the midfielder has struggled to hold down a starting spot under Wenger’s successors: Unai Emery and Arteta.

Off-the-field issues also seem to have further derailed Ozil’s status at the club. He was among three players to decline a wage cut that had been requested by the club’s board due to the financial implications of the coronavirus pandemic. The midfielder later said that players were “rushed” into making a decision.

Ozil will not be able to be added to the club’s league squad until January, with growing speculation over whether he will finish the season at the club.

Mesut Ozil’ situation is sure to spark change in the way high profile players are treated and managed by their clubs. The debate will continue whether clubs should give players these high wages and justify alienating them from teams in the future for the same reason. This is just the beginning.