Could the ongoing development project that includes a modern makeover of the Red Light District really transform the city of sin’s infamous reputation? 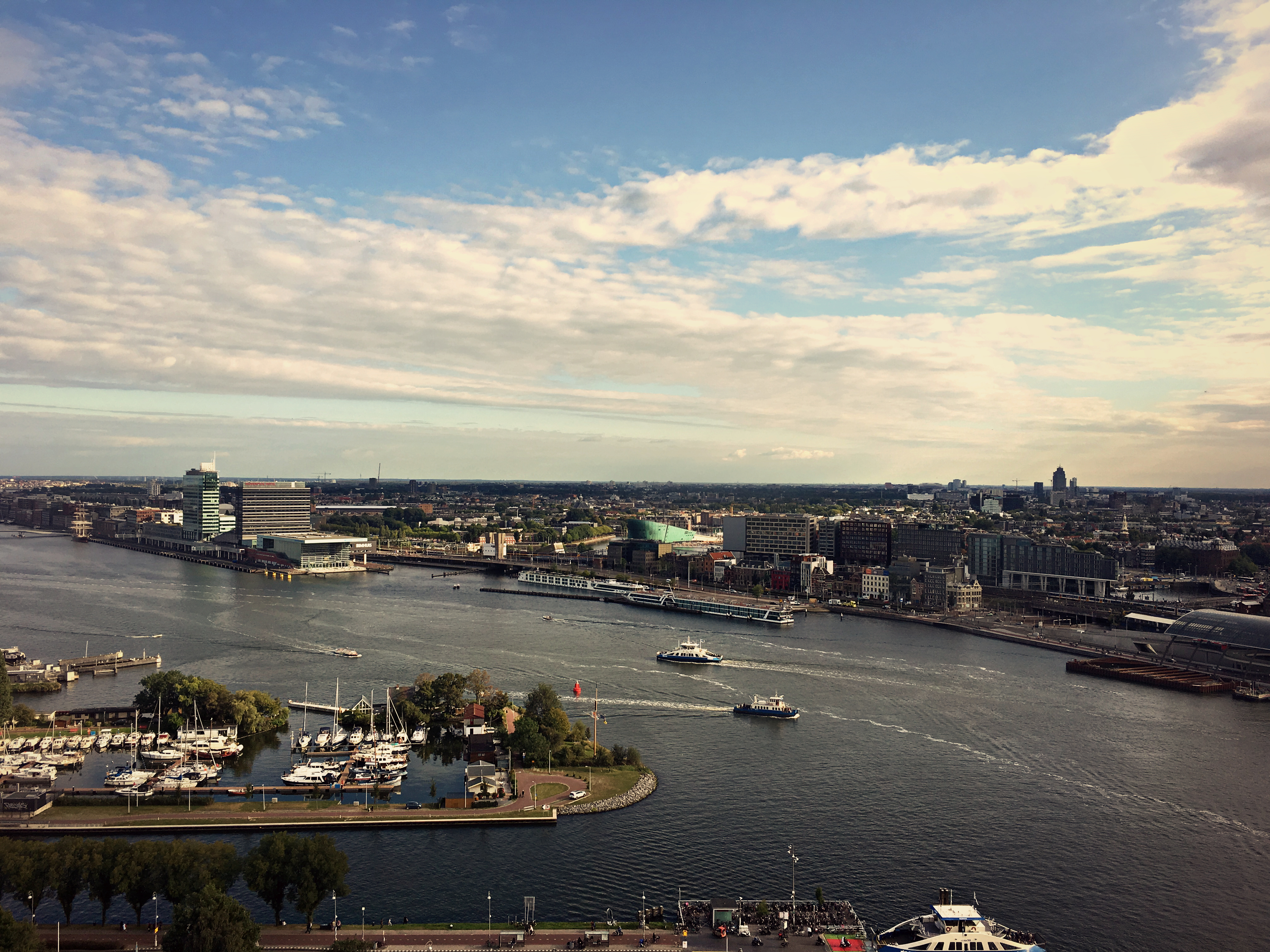 Panoramic view of Amsterdam from the A’DAM Lookout

“Okay, go get it.” “No, you’re the older one, you do it!” “Yes, I am the older one, so I am telling you to do it.” I sighed. Having a cool older sister by your side in Amsterdam, one would think she’d be the one providing the drugs.

Prior to my trip, my friend from the Netherlands did try to clarify the rocket science behind the drugs law, but the multiple contradictions left me even more confused. The Dutch drug policy considers the use of soft drugs a health matter – a matter of personal use – and it is comparable to the alcohol and tobacco consumption. So for example, coffee shops can legally sell weed in small quantities, but not advertise it directly – hence they’re not called Get Bud Here (although the one I visited is named Smokey).

However, coffee shop owners cannot grow plants or sell products to the actual cannabis shops. So when it comes to the drugs making it to the actual shops, the authorities tend to look the other way. ‘’The whole idea behind legalising coffee shops and decriminalising  the use of weed was for the government to gain greater control over the drug use in the Netherlands and to take the shady drug dealers out of business and off the streets’’, my friend says. But new government policies from several years ago are now aiming at the ‘professional’ cannabis growers – basically anyone growing weed under electric lights. Which is most of them.

Due to the still complicated drug laws in the Netherlands, professional marijuana growers risk big penalties. Therefore, with the new regulations in action, coffee shop owners choose to get their products from criminal organisations. ‘’Not only people are now complaining on the bad quality, since these dealers grow their plants God-knows-where ’’, he explains, ‘’but also, with coffee shops getting the pot from the black market, the original purpose of legalisation has the reverse effect’’. What did I tell you? Rocket science.

A week later, I was walking to the Smokey coffee shop’s bar, very intrigued with the colourful marijuana menu I was holding in my hands. “Okay, go and ask him’’, I heard my sister saying behind my back.

The guy at the bar smiled at me saying, “Hallo’. “Hallo”, I replied trying to mimic his accent. I guess I did a decent job, as he asked “Hoe kan ik u helpen?”

He laughed and tried again with, “How may I help you?” Side note, English is very common amongst the Dutch citizens, especially when you compare this country to, for example, France.  “Yes, I would like two hash brownies and one joint, please.” The bartender looked at the glass counter in front of me saying, “Sure, which one would you like?”

Blink, blink. I find McDonald’s offer too overwhelming, so, naturally, this was impossible. I was staring at more than 20 different types of marijuana – some being Northern Lights, Ice, White Widow, Buddha, Citral, all in different coloured packaging, most in different sizes. It is important to point out that I had no experience with buying bud. It took some time, and a lot of help from the bartender, but we left the crowded, dark, warm café pretty satisfied.

On that day, Smokey was packed with both locals and tourists, which was expected, taking into account its amazing location at the Rembrandtplein – the Rembrandt Square in the city centre. However, when it comes to the drug use, some parts of Amsterdam are experiencing a modern makeover; the ongoing government plan titled Project 1012, proposed in 2007, aims to ‘’improve’’ the world-known Red Light District by decreasing the number of brothels, coffee shops, adult shops, sex cinemas and other ‘’tourist trash’’ businesses. Replacing them with more luxury entertainment, restaurants and boutiques, the authorities were hoping to make it more attractive to a wider range of tourists (or a higher class of tourists), but also to reduce the crime in the historical city centre.

Named after the district’s postcode, Project 1012 initially intended to shut down around 50% of both red light windows and cannabis shops in the infamous neighbourhood. So far, more than 100 windows have been closed, due to the suspected issues of forced prostitution, human trafficking and organised crime. But the project’s initiative which was supposedly launched to support and benefit sex workers and their safety – left them jobless. These actions led to some wondering whether the government used the suppression of criminality and the issue of sex worker’s safety as a suitable justification for grabbing the valuable properties in the popular district. 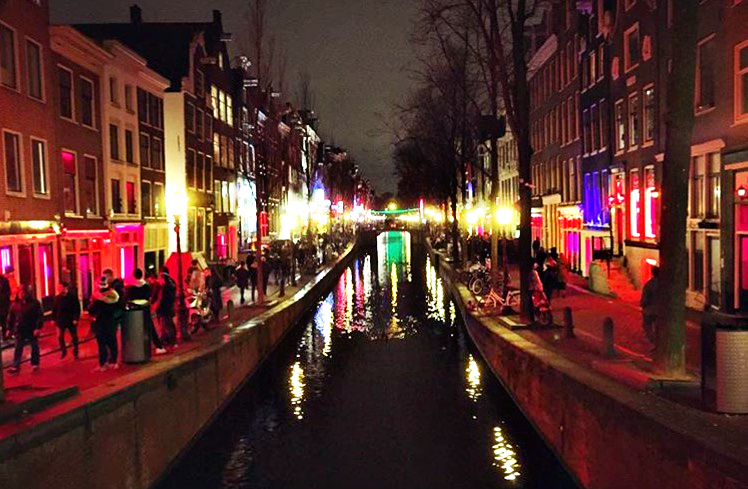 The sex worker’s dissatisfaction evolved into a protest gathering more than 250 prostitutes and their supporters in April last year, retaliating over the closure of the windows. Sex workers argued the project’s measures will force half of them into less popular, but also less protected areas of the city – and less protection could allow a higher level of crime. The accusations that the government hid their true intentions behind the official aims of Project 1012, along with the demonstrations in the capital, eventually pressured the authorities’ to stop shutting down red light windows by the end of 2015.

Will the development plan end successfully is yet to be seen. But when visiting Amsterdam in September, I witnessed hundreds of tourists in the largest and most crowded part of the Red Light District known as Wallen. There was a lot of staring (like, a lot), pointing and photographing, but it was somewhat obvious they came for the notorious reputation; in the evening, a lot of sex shops and coffee shops were crammed as well.

So I can imagine the city’s tourist industry would take quite a hit with clamping down on the district 1012. The Red Light District and the city’s soft drug policy is considered a symbol of Amsterdam’s image as a tolerant and liberal place by a lot of people, so the planned modifications are bound to affect that. Also, with the ongoing project’s intentions to shut and replace only half of the shady businesses located in the heart of Amsterdam, it’s difficult to picture the new scene; so you would be enjoying your Sunday brunch in a high-quality restaurant before going across the street to the first window to chat about the minimum local rate? I guess we’ll find out. Whether or not the ‘trash’ culture is overpowering the high-end tourist sector is difficult to say, but is Amsterdam definitely not lacking the ‘high class’ cultural and historical attractions. 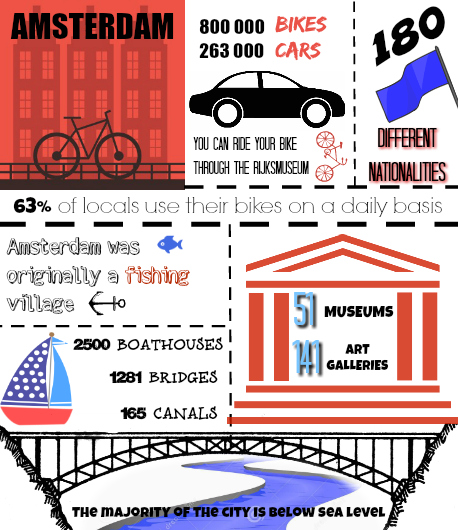 From Rijksmuseum to Van Gogh, Amsterdam is a home to 51 museums, making it the world’s most cultural city compared to its size ratio. Also, taking a cruise through the luxurious UNESC World Heritage canal district is where you can truly see the picturesque architecture mirrored in centuries old grand facades and gables, charming, narrow houses and some of the numerous fascinating bridges. I paid way more attention to the structure of the city on that cruise (thank you, drugs) than I did couple of days before, while riding on the Yellow Backie.

The inspiring concept behind the Yellow Backie, where you ride on the luggage rack of a random Amsterdammer’s bike, is ‘to spark some love between Amsterdam locals and its visitors with a famous Dutch custom’, according to their website. But with more than 800,000 bikers cycling around the city (the fact there’s only about 263,000 cars blew my mind), I had a difficult time finding the bright yellow luggage rack which would signify a Backie rider. Finally spotting a young blonde girl riding a bike that matched the description at the main train station Amsterdam Centraal, I did what was instructed on their official website – I yelled ‘Backie!’. The girl pulled over, smiling. 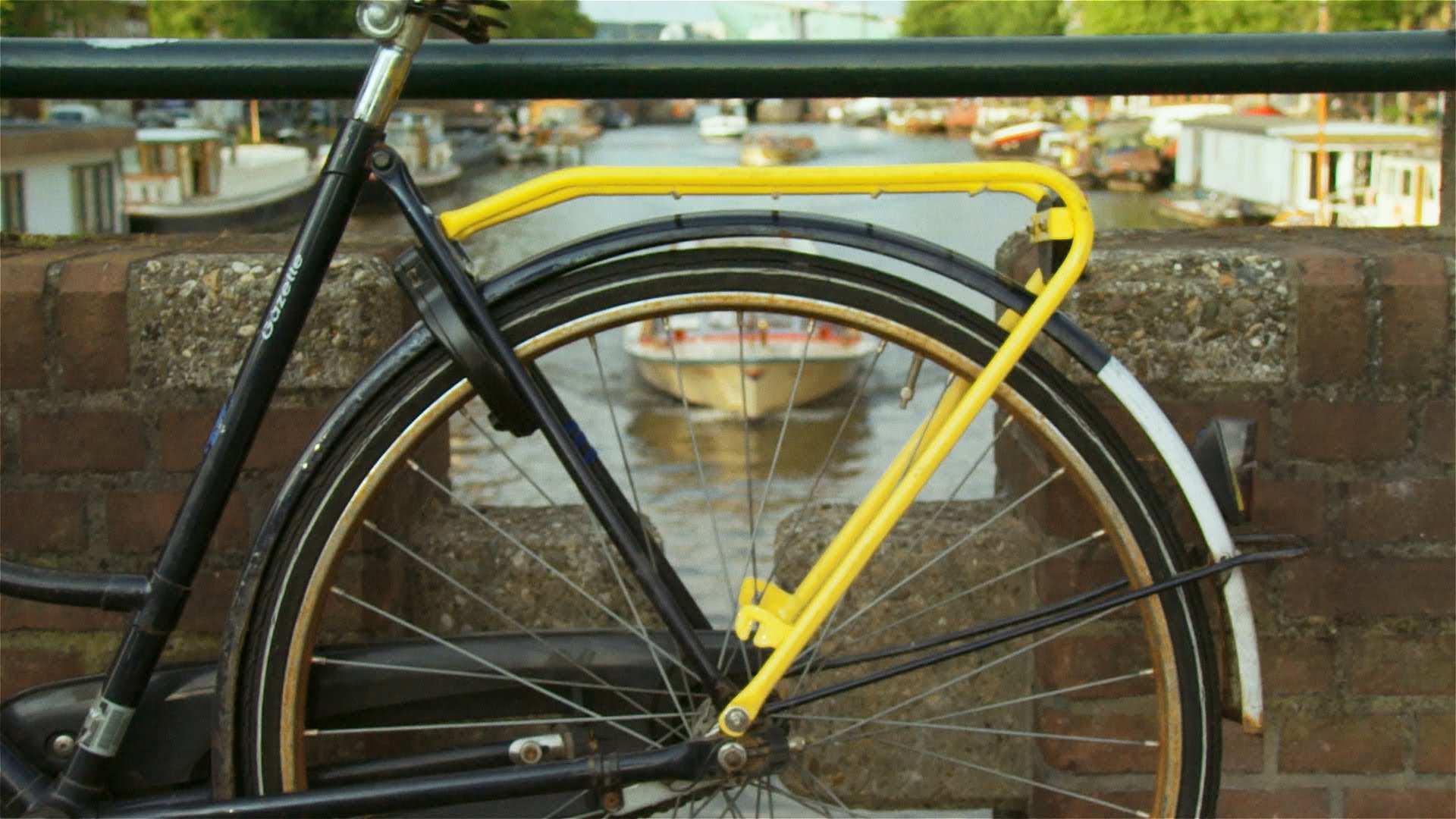 “So what can you tell me about this place that I don’t already know?” I asked the lovely Alex during our short ride. “Um, did you know Dutch men have an average height of 182.5cm, making them the tallest on the planet?” Nope. I was also curious to hear a true Amsterdammer’s thoughts on the ongoing transformation of the city centre, but she did not say much. ‘It’s not going to work’, she said, adding that she thinks no tourist will visit the Red Light District for fancy shops instead of sex shops.

Alex cycled away from the station, chatting about the Amsterdam traditions. I wanted to know how come there’s no fences at the streets around canals, yet there are more bicycles than people? “Like, don’t drunk or high or simply clumsy folks fall into the water?” “Yeah, all the time. There are like thousands of bikes’ remains at the bottom of those canals. I don’t know why they don’t build some fences already”, she replied, adding how unsafe and dangerous that is. “Did you ever fall in?” I asked just when we were crossing one of the bridges, about to stop next to my sister. She laughed and pulled over. “Twice.”

I hopped off. Off a stranger’s bike. In the city of drugs and prostitution. Add that to the list of the things I never thought I’d do. 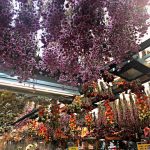 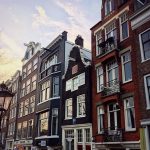 A view from the canal cruise 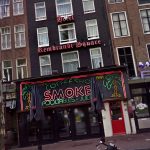 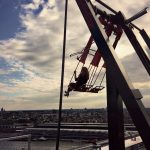 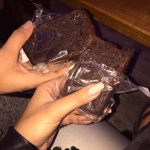 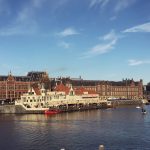 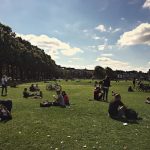 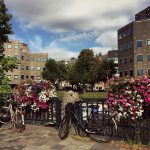 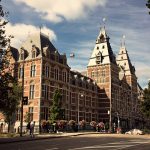 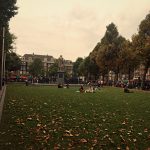 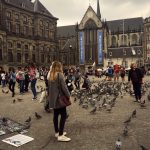 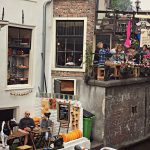 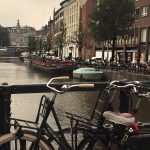