Milk is undoubtedly glorious in all of its secondary forms, but god is ice cream delicious. Any kind, really, but I’ve grown tired of my usual Ben and Jerry’s Half Baked. And though I always feel like I’m cheating when I eat something else, passion has grown to overtake reason and I’m left with one mission: find the most unique ice cream in London.

After all, what’s the point in living in a world capital if you don’t go on an adventure every now and then? 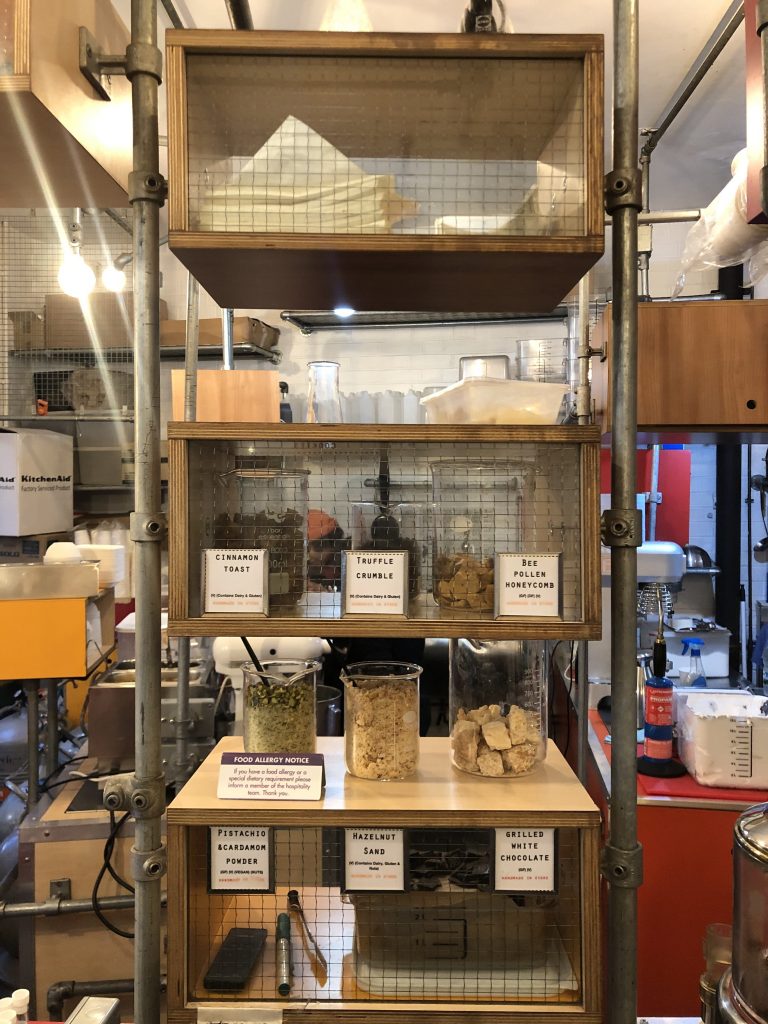 It started at Mamasons Dirty Ice Cream in Soho. Much like a child, bright colours draw me in and before I knew it, I had lavender ice cream all over my face.

Totally worth it. Mamasons is a trendy take on Filipino desserts, serving flavours such as a pitch dark Black Buko, or charcoal coconut, and Ube, a native purple yam similar to taro, in Bilogs. What are Bilogs, you ask?

Well, delicious for starters. It’s a freshly toasted milk bun filled with their signature flavours. It certainly helps that they’ve got the mouthfeel down-pat. It’s dense, rich, hits like a meal, and is most certainly worth the money.

Though I have to say – the Ube could be much better blended. It adds a texture reminiscent of butternut squash, which I suppose makes sense considering it’s a root. Still, it’s not exactly what I’m looking for in an ice cream.

Just about everything I saw caught my eye, but there was something in particular that piqued my interest.

On the menu was an ice cream called “queso”.

I mulled it over as I waited. Queso? But isn’t that cheese? So I googled it and no, I wasn’t mistaken.

As a foodie, I consider myself to be fairly well versed on cuisines across the world, so I was surprised I’d never heard of this before.

So I tried it.

Hell no. The cashier compared it to cheesecake, but I strongly beg to differ. It’s so sharp on the cheddar, pungent almost, not cut nearly well enough with sugar and cream to tie it together. And where their dense creaminess makes their Black Buko one of Chinatown’s not-so-hidden gems, this particular dish smothered my palate. 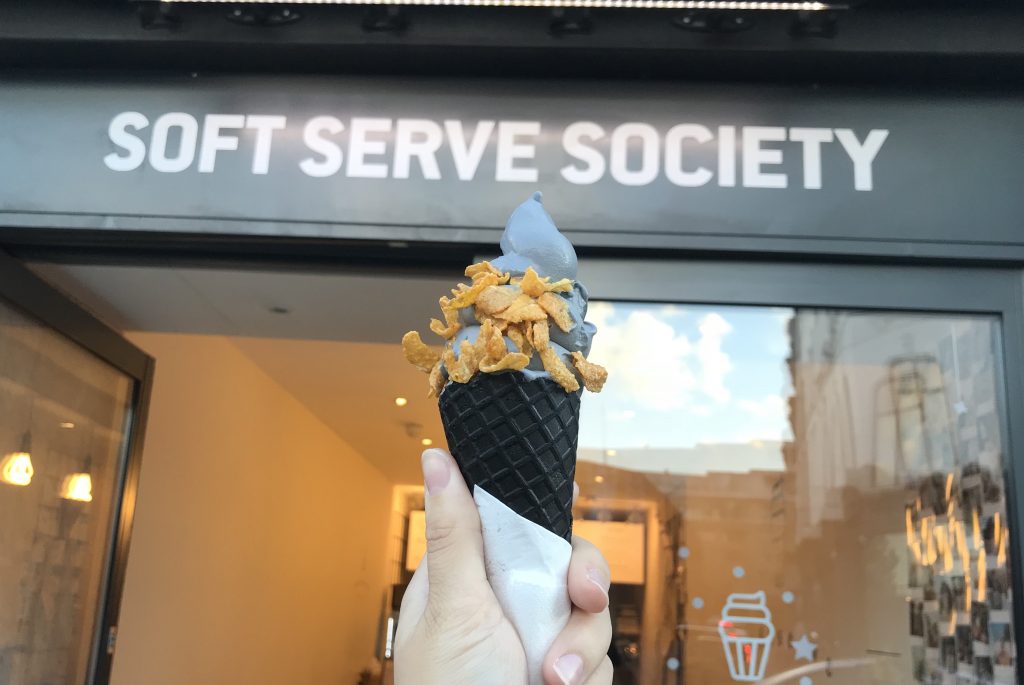 I stumbled across Soft Serve Society whilst crossing Shoreditch’s BoxPark. It wasn’t the sign that caught my eye, but instead the man sitting below it with a black cone filled with dark grey ice cream in hand.

Much like Mamasons, the black ice cream is charcoal coconut, but as far as I’m concerned, it’s a whole different dish.

As you may have figured, this place specialises instead in soft-serve. But it’s still smooth- possibly the smoothest I’ve ever had, and though the creamy coconut is delicious, it isn’t what makes the ice cream as unique as it is.

While Mamasons charcoal coconut’s actual charcoal adds no more than its inky colour, Soft Serve Society utilises it in a refreshing way.

It’s almost… crunchy, and upon further inspection, you can see the tiny black crystals blended into the ice cream. They’re the perfect size, don’t add much of a taste, but the mouthfeel is unlike anything I’ve ever had before.

It’s a beautiful contradiction. Once it melts on your tongue, your palate is left with a confusing but wonderfully pleasant texture. There’s nothing to chew, per se, but if you bite around the quickly melting softness, you feel it. 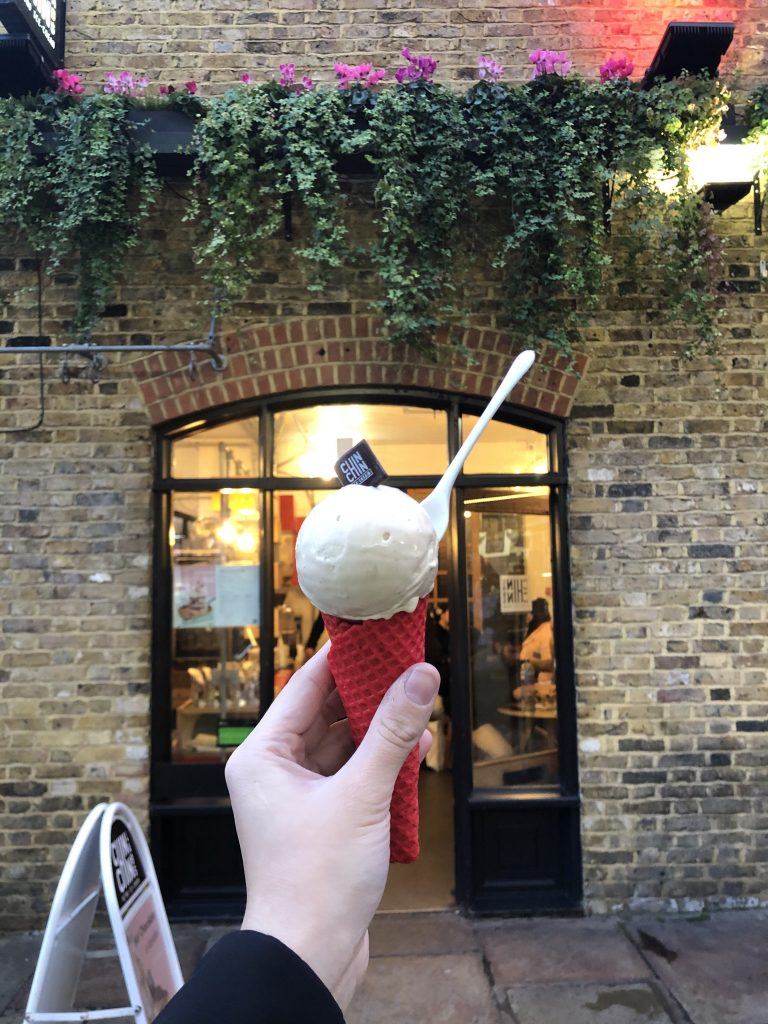 There’s something about an eatery with the word ‘Lab’ at the end of it that catches my fancy. Sounds futuristic, doesn’t it?

It sorta is. Their ice cream is frozen on-demand with liquid nitrogen, leaving you to watch your server disappear into a white cloud only to reappear moments later with your ice cream in a bright red waffle cone.

I got the Tonka Bean, mostly because I had absolutely no clue what on earth it was. The cashier described it as being most similar to a vanilla bean, and though that momentarily cut its appeal, I figured I’d try it.

What a pleasant surprise! It’s like eating Thanksgiving and Christmas all at once!

It tastes familiar, yet unlike anything you’ve had before. It’s spiced. The Tonka Bean is surprisingly strong in flavour, drawing in bits of fall and winter. It’s most comparable to a chai latte, or maybe a pumpkin spice latte minus the coffee. It isn’t something to enjoy during the warmer months, but it’s the perfect holiday treat.

It’s incredibly rich as a result of the nitrogen- dense enough for me to wonder if I couldn’t spread it across my toast. But the waffle cone was close, if you could even consider it that. The shape may fool you, but upon biting into it, you’ll realise it’s a sugar cookie in disguise and an impressively thick one at that.

After his first bite, my friend paused, looked at me, and said, “I could write poetry about this sh*t.”

I don’t know what kind of art Chin Chin is practising, but they appear to have mastered it.

London knows it’s ice cream. There were a handful of places I tried, all good, like Ruby Violet’s Raspberry Rosewater Prosecco sorbet, but I definitely have a bias towards the rich and creamy. 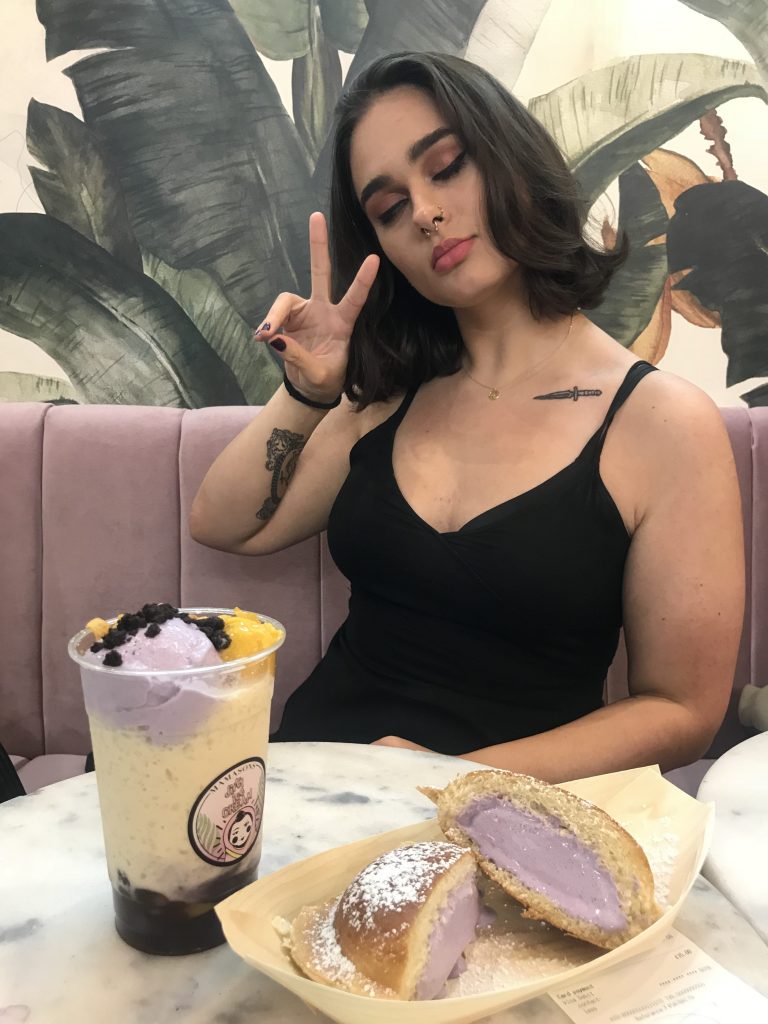 There isn’t one that’s significantly better than the other. At its price point of £6.50, Mamasons Bilog is the best value for money- it’s fairly large, making it the most filling, but Chin Chin’s nitrogen technology has a futuristic appeal to is and is most certainly delicious. Regardless, the charcoal in Soft Serve Society’s ice cream takes the cake- or waffle cone, if you will.

It’s satisfying, but not too filling- perfect as a midday snack or a light dessert after dinner, and the versatility in not one aspect, but two makes it the most unique ice cream in London.

Words and pictures by Kieran Mehra