As the national conversation around mental health begins to finally take hold, Voice of London discovers how one young woman overcame depression and the loss of a loved one to cancer through creating art. 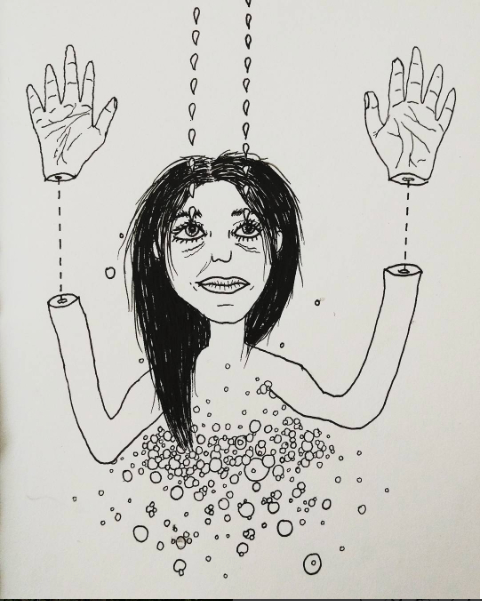 ‘Take my hands, I’m not inspired anymore’ | (All images by Chloe Manning)

Rates of depression and anxiety amongst young people have increased by 70% in the past 25 years, and one in four (26%) young people in the UK experience suicidal thoughts according to Young Minds.

This worrying trend shows that mental health is a problem that needs immediate attention, and anything that helps people express these thoughts should be embraced with open arms.

Many young people find it difficult to express themselves, especially when there is a lack of understanding within the home environment.

Often it isn’t the family’s fault due to a lack of education on the subject, but it can lead to misunderstanding or unwillingness to accept that their child is going through the hell that is depression.

Nobody wants to see their child in pain that cannot simply be fixed by a plaster or bandage.

At 18, Chloe Manning was put in a position that would be painful at any age and took on the role of helping her father who had lost his mother to lung and pancreatic cancer.

Now 20, we spoke to her to find out how producing art helped her overcome that pain and come to terms with death and depression within a family that didn’t fully understand the illness.

Voice of London: How did you use art when you were going through problems at home?

Chloe Manning: I used art as a voice I could have in personal life.

I created an installation about conflicts within the family, about the deteriorating relationship between me and my mum.

I was getting older and developed opinions and thoughts that she didn’t really want to listen to, and couldn’t really empathise and this led me to lose respect for her slowly, because I was losing my nan at this point and just needed someone to speak to.

My mum and dad are separated which also caused problems between the families and I was left responsible for picking up those pieces too. 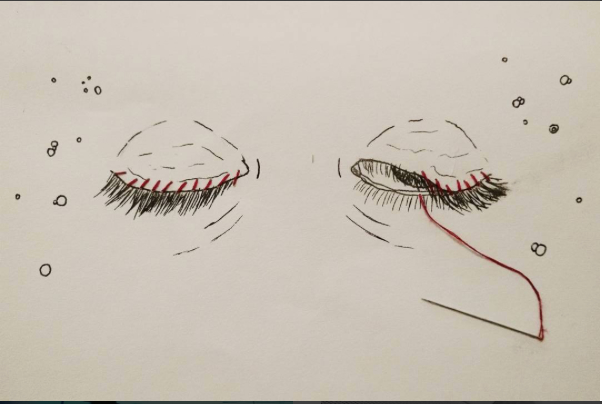 ‘Then sew my eyes shut’

Why did you create art instead of talking to your friends and family about your mental health?

Depression is a really hard thing to talk about. Even though I knew my friends would support me fully, I felt like admitting to them that I was falling apart meant that I was admitting it to myself.

I wasn’t ready to do that because I had to stay strong for my family. I didn’t want people to feel sorry for me, because it was my nan and dad who were going though it the most.

I needed art in my life. Being able to have this place of my own, this space between me and my artwork was all my own. It sounds really cliché but there is really nothing else like it, everything else goes away.

What was the hardest part about coming to terms with the cancer?

I watched films that talked about the “good days” when dealing with cancer, and I held onto that. But that thought just made the bad days worse.

There were days where my nan would go outside and talk to everyone and smile, and other days she was so weak she wouldn’t even be able to wake up for the whole day.

You never expect both ends of the spectrum to be that extreme.

How was your mental health affected after the loss?

A part of me had died. I spent so much time with her, and my family, and I was distracted for a long time.

The dust had settled and there was nothing left to hold together because everything was just broken, and I lost control.

I was drinking heavily, because sobriety was not an option.

Two bottles easily helped me numb my emotions, but led to the decline of my relationship with my friends. I just stopped caring.

Even though I had all of my family and friends around me, I still went home and was completely alone, and I was too scared to go to the doctors because I didn’t want to be on medication for the rest of my life.

I met my boyfriend a month after, and he saw things that nobody else did. I would hit myself and make myself throw up. I was reaching a point of no return and realised that I had to look at myself and find another way to subvert that pain. 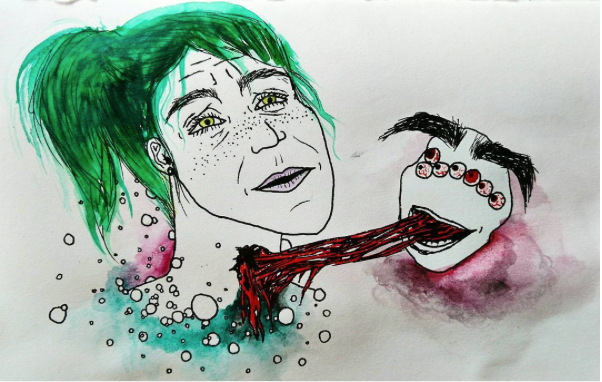 ‘Snapped in the trap’

How did this spiral affect your artwork?

My artwork during that time was mostly expressive drawings with drunken words all over it. None of it really made sense.

However, after I had started recovering, I created a book that illustrated everything I had been going through for the past year.

It included photos of the pizza cutter I had used on myself in the past, and the places I went to help me forget.

The book, towards the end, was filled with positive influences in my life.

There were pages dedicated to my friends, my dad, and my boyfriend who have all helped me grow and have influenced my life in a positive way.

Once I’ve created art about it, I don’t have any reason to go back to that pain because I have explored it enough and can now close that chapter of my life.

It helped me move on from the death and still helps me cope to this day.

What would you say to other people who suffer from mental health problems?

People who suffer with mental health issues need that safety net, when it’s hard to express that part of yourself.

You might be worried about others’ assumptions and judgements, but art isn’t asking you questions or judging you.

Art doesn’t think you’re a burden, you can make as much art about this as you want, until you decide when it’s enough.

Art has no limitations, until you decide to limit yourself. 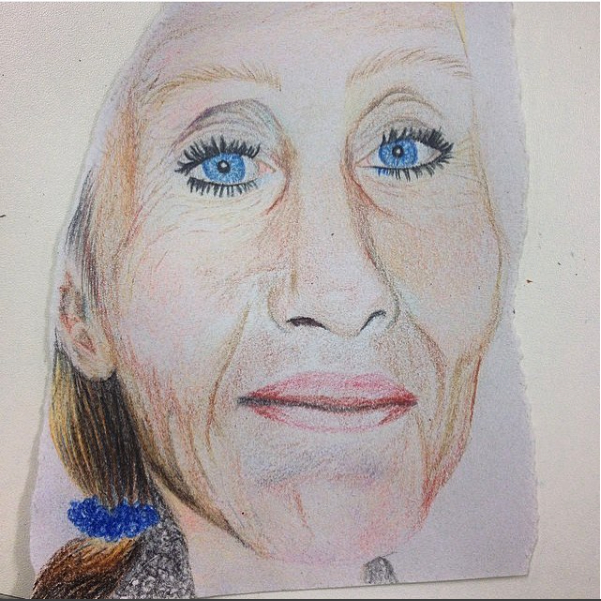 Chloe is now studying Fine Art at Central Saint Martins and is hoping to pursue art therapy in the future to help others like herself.