‘Based on Marvel Comics’.

Most audiences see this in the credits of any Marvel film or TV show. However, it never states which comics. This is because most Marvel productions take little ideas from different movies of the universe.

But the recent Marvel Disney+ shows have taken inspiration from some specific comics. For example, the hit ‘WandaVision’ takes its inspiration from two specific comic story-lines; ‘House of M’ by Brian Michael Bendis, where Wanda Maximoff – also known as Scarlet Witch – suffers from a breakdown and reshapes reality, and ‘Vision’ by Tom King, where a robot called Vision creates his own family and tries to live a suburban life.

The new Disney+ show, Hawkeye, is no exception. It is heavily inspired by the 2012 comic book run from the same name, by comic book writer Matt Fraction and artist David Aja.

The comic revolves around fun loving bachelor Clint Barton – also known as Hawkeye – and teammate Kate Bishop, as they aim to take down a criminal gang and look after a dog called Lucky, who loves pizza.

The show does this as well, but instead of Hawkeye being immature and acting before he thinks with Kate keeping him in line, it is the other way around. This feature portrays Hawkeye as the family man where Kate is impulsive and lacks inhibition.

Who is Kate Bishop? 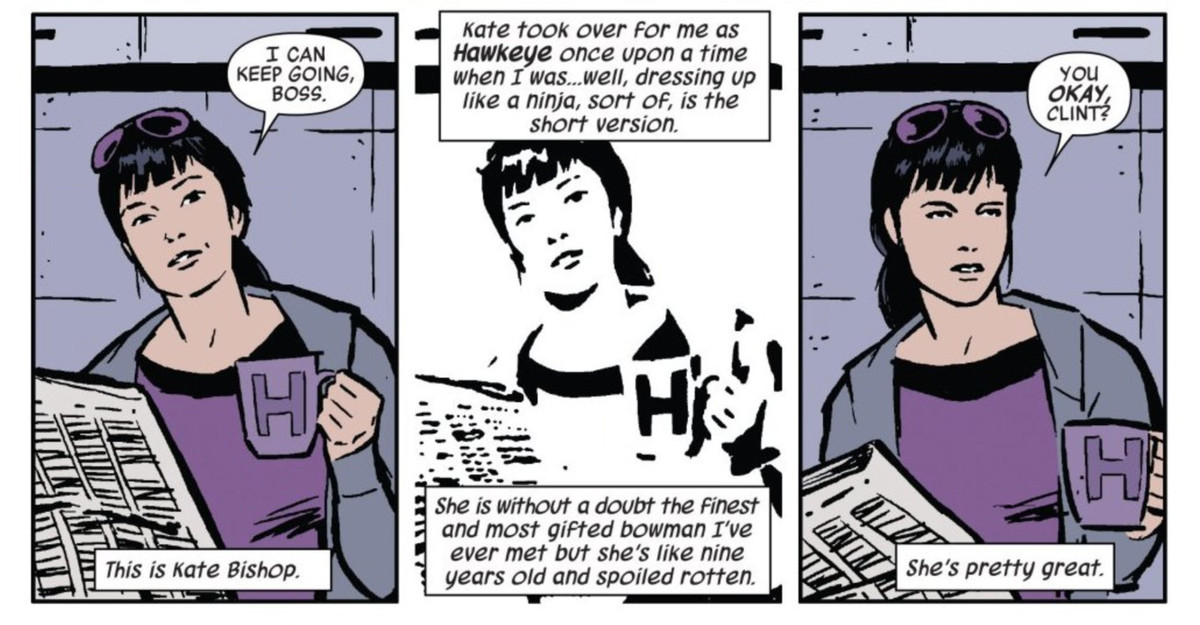 In the comics, Kate Bishop is a young woman who adored Hawkeye. She was introduced in the Young Avengers story-line back in 2005, and picked up the mantle of Hawkeye after he died in the original comic. He came then back to life (all comic book characters do at one point or another). She worked alongside the original Hawkeye, and this comic follows their dynamic relationship and her character growth.

The comic also follows what Hawkeye gets up to when he is not being a superhero. This often involves eating fast food and getting injured a lot – he is the most human member of The Avengers, after all.

The fan reaction to the comic has been very positive. Comic writer, Liam McGuire said:

If enjoy Hawkeye, please pick up the comic that it's heavily based on. Hawkeye by Matt Fraction, David Aja, and Matt Hollingsworth is one of the best comic arcs Marvel has ever done. pic.twitter.com/WqVFyPXZzd

Enjoying #Hawkeye on Disney Plus?

Consider diving into Matt Fraction and David Aja's 22-volume series that's been heralded as one of Marvel’s best comics since the first edition came out in 2012. https://t.co/o0N662v0lA pic.twitter.com/s1UKfLeKvC

It’ll be interesting to see where the TV show goes next in terms of the similarities and differences between the comic and the show. Stay tuned for Voice of London’s review of the TV show, Hawkeye, coming soon.