With the Coronavirus vaccine rolled out today, the NHS is working to improve public trust in the jab and has named celebrity endorsement as one of the key methods to do so. But is this the best and most ethical method?

What this celebrity endorsement will entail is still unknown, but public figures could be used to promote the usage of the vaccine. No key figures have been officially announced but it has been suggested that footballer Marcus Rashford would be suitable.

News of this has been met with much anger, with one Twitter user joking that if Rashford were to support the vaccine, someone should end his football career.

Research in 2018 found that 52 per cent of Brits opposed the involvement of celebrities in politics compared to a low nine per cent who supported it. YouGov explained in their findings: “most Britons (63%) say that celebrity endorsements make no difference to their views in any case, with one in four saying they have a negative effect (25%) and just 5% a positive one.” This is despite research showing that celebrity endorsement – especially on social media – is incredibly effective.

We asked the British public in a questionnaire how they felt about celebrity endorsement of the coronavirus vaccine. Here are some of the responses: 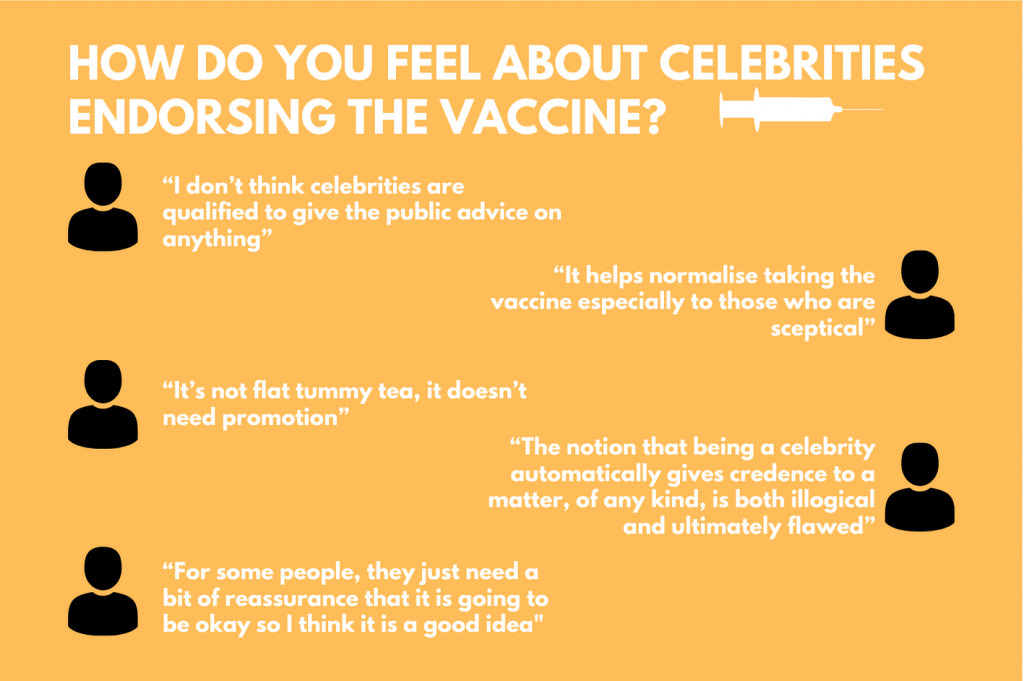 If the glorious state has to resort to employing obscure soap actors and vacuous reality TV 'celebrities' to convince the public that a medical intervention is safe and beneficial, then the state is beyond desperate.

Have the government taken the wrong route?

Scepticism concerning the vaccine has been inevitable. The pandemic itself has led to concerns surrounding coercive control; anti-vaxxers have held strong views surrounding vaccinations before the Coronavirus outbreak and the speed of the vaccine production has risen key concerns with its safety.  But it is vital to ask whether the government themselves have had a significant effect on this scepticism.

Attitudes towards the government are clear. Whether individuals choose to obey or disobey, there is an apparent mistrust in our governing bodies. Politicians are one of the least trusted professions, with Fullfact reporting in 2019 that a mere 19 per cent of the population said they trust them to tell the truth, and a less promising statistic of 22 per cent trust government ministers to do the same.

With such weak trust in our ruling bodies, it is evident that government pressure is not enough. This downfall has led them to look elsewhere for influence, and maybe even the worst place.

Celebrity endorsement raises key concerns in this case. Their influence may be used for what we believe is good, but celebrity support fails to solve issues with our trust of the government, and in fact, threatens to reduce it even further.

A variety of questions now need to be asked. Are celebrities going to be paid to endorse the vaccine? Is it fair for celebrities, who have little to no medical knowledge, to encourage the vaccine? And why are British politicians not working on the issue in hand: the mistrust of government that goes beyond the vaccine?

Research by the University of Oxford found that there had been a sharp decline in government trust during the first few months of lockdown. They stated in their findings: “Trust in the UK government as a source of coronavirus information has declined substantially since April. 48% rated the government relatively trustworthy in late May, down from 67% six weeks earlier.”

So who should take the vaccine?

For many, it is the case of ‘I’ll believe it when I see it’, and it may very well take that to build up the trust of the people. Having MPs and other key figures in the fight against Covid-19 take the vaccine on live television with full transparency (no fake syringes, placebos or staged inoculations) could provide the British people with new confidence in the coronavirus vaccine.

According to Sky News, the Prime minister could take the vaccine on live television to encourage others to do so, but this announcement has not completely soothed the concerns of the British people.

We asked people which celebrities or public figures they would like to see take the vaccine live on television. See the top three choices below. 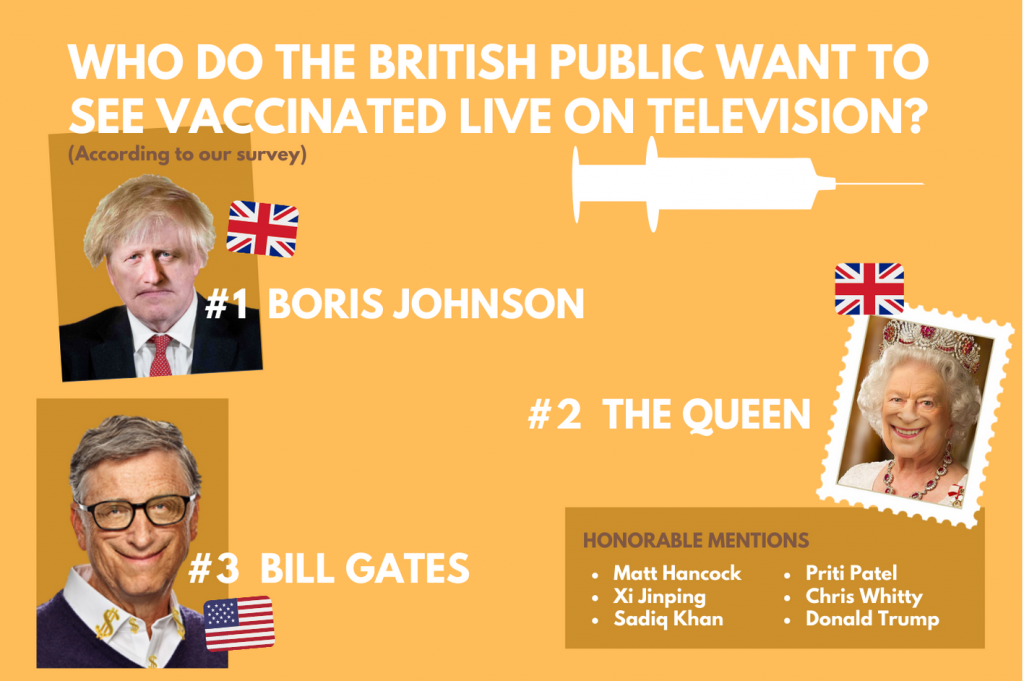 Infographic and photos by Leah Trimmer

Right, who's on your list for people who should have Covid vaccine on camera for the greater good. So far I have the Queen, Attenborough, Marcus Rashford, Shah Rukh Khan, Captain Tom Moore and Miriam Margolyes.

Ultimately many questions and much uncertainty remains, as we may not be able to predict the effectiveness of celebrity endorsement until it begins. But until the government themselves work to clarify these concerns and work to regain trust, celebrity endorsement may be a waste of time and money.