With the passing of Movember, men’s mental health awareness has seen a dramatic increase, with the phrase ‘man up’ finally starting to disappear.

Men’s mental health has always seemed to have been overshadowed by the stigma that men are able to deal with their problems single-handedly and don’t need support from others. This comes from generations of constant gender stereotyping, yet has seemed to have finally broken away, with the issue being taken much more seriously compared to ever before.

This interview helps to show a glimpse into 20-year-old ski instructor Lewis Childs day to day life coping with mental health issues, and how tough it can truly be, whilst living through the global pandemic.

Lewis is one of many men from across the UK, and around the world who struggles with mental health issues, with the pandemic’s constant lockdowns around the world seeming to make matters even worse.

The pandemic has put a halt on social meetings, as well as activities to take part in across the UK. Lewis not being able to ski is just one example of how the pandemic is bringing down so many men’s mental health, as they are not able to clear their mind from the influx of thoughts that go through one’s head.

Statistics show that since the UK’s original lockdown back in march, depression has had a numerous amount of spikes, most notably during late April, as well as the more recent spark at the beginning of September, showing a correlation between men’s depression and kids returning to schools. 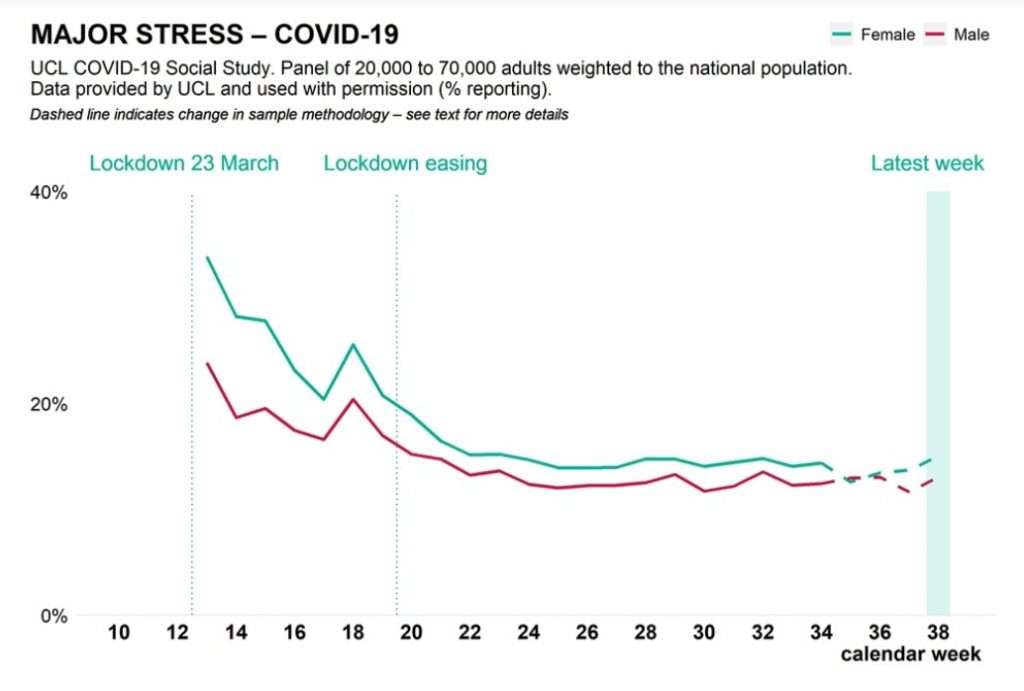 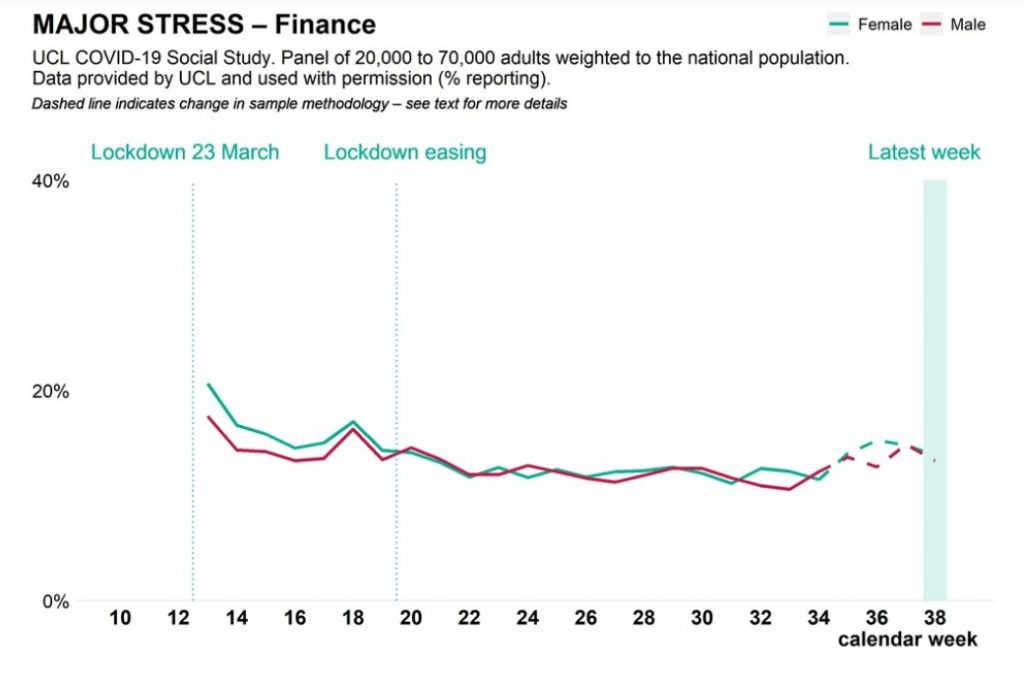 Statistics across the whole board show this same upraise during late April, and the beginning of the school term. The original spike helps show the long term effect lockdown has had on men’s mental health, with the spike occurring not long before restrictions began to be lifted, showing the true impact isolation can cause. 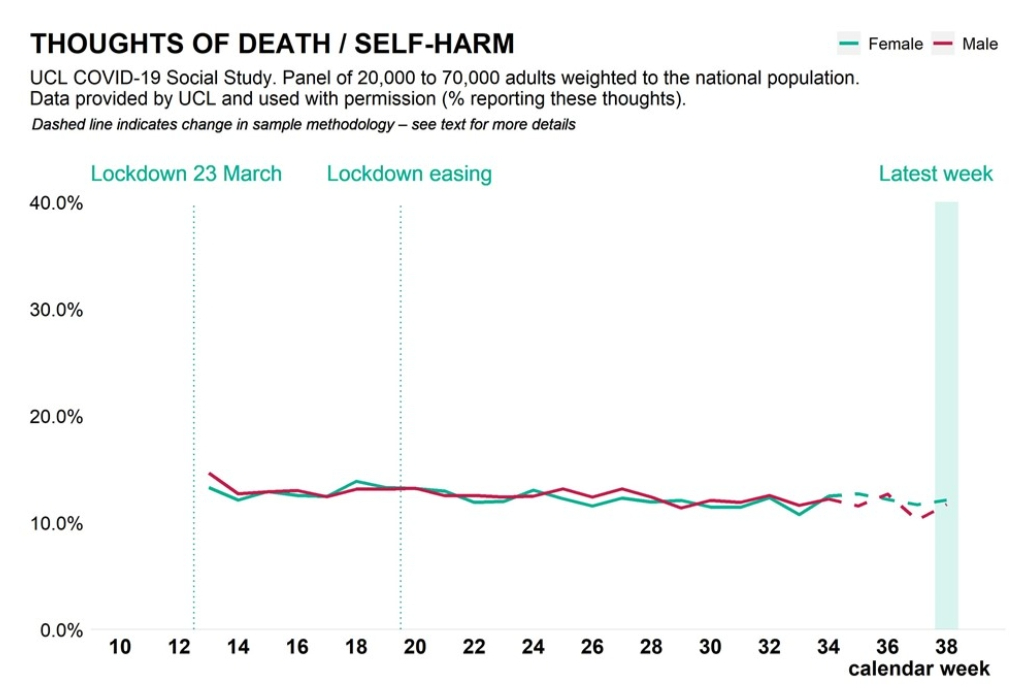 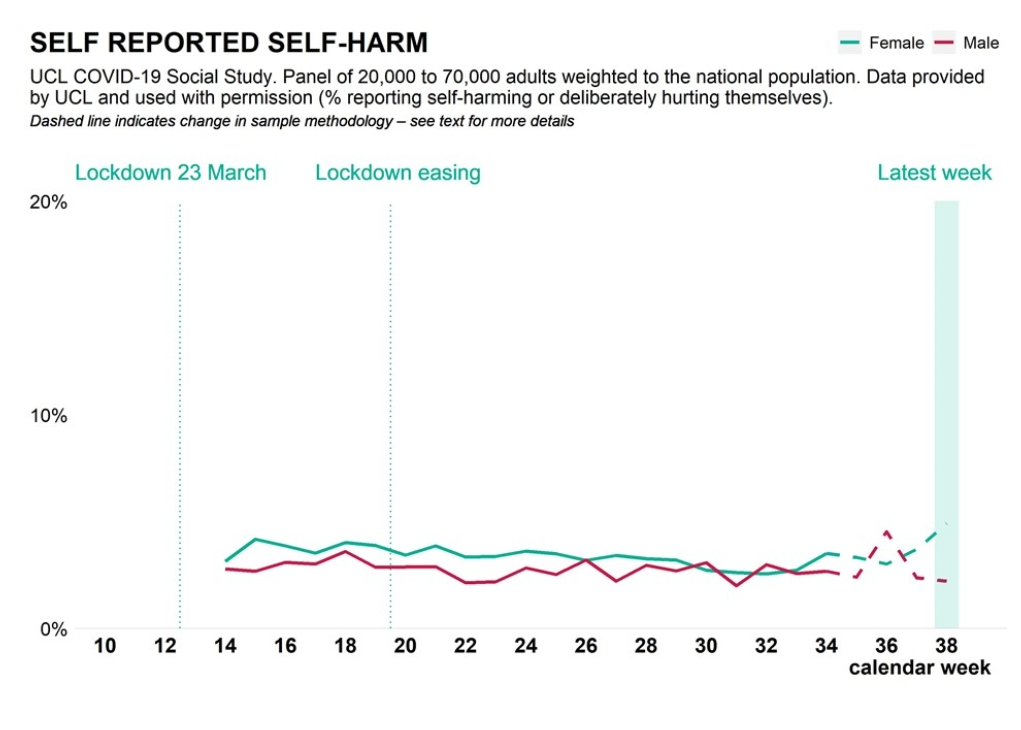 Even though men’s mental health is finally getting the awareness it has needed for so long, women still seem to show a higher percentage of suffering from mental health issues when comparing the genders.

This can come down to an array of reasonings, such as women being naturally more in touch with their emotions, to men being less willing to admit or talk on their own mental health when looking into the statistics.

However, within the category of reported self-harm, men seem to leap over women during the week kids return to school.

When comparing the data to the statistics on depression, you can see that even when women report to suffer at a higher percentage compared to men, you can see that when men suffer, they are more likely to inflict physical pain on themselves, showing the extent to how the situation has become.

This shows why more light needs to be put onto men’s mental health, compared to the little attention it has gained in the past. 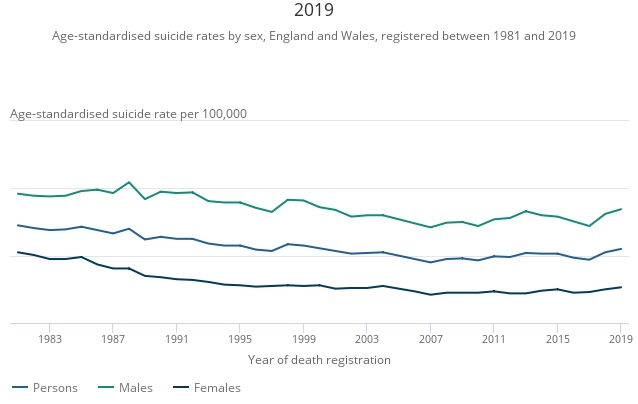 The suicide rate for men was reported at being the highest it has been since 2000 only last year. With reports of self-harm spiking over the year, it is crucial that the UK keep raising awareness, so we do not see another rise over the following years. 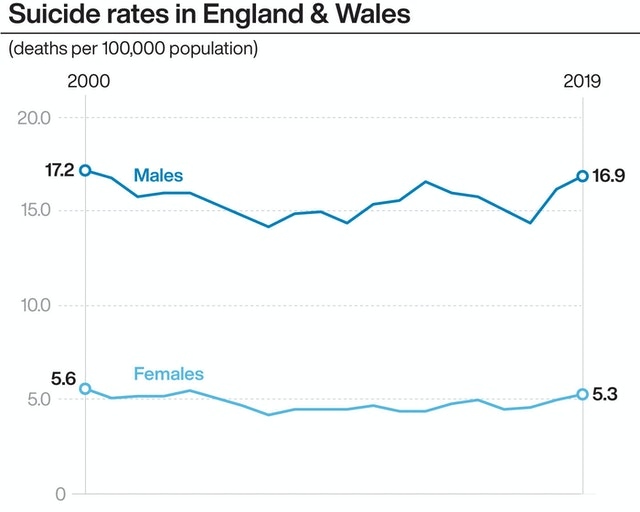 Graph by: Office for National Statistics

Suicide rates in men reported at over 75% when compared to women across England and Wales. Suicide is the biggest cause of death to men between the ages of 20-49 in the UK.

What has been done?

November has a tradition which sees men not shave their moustaches for the whole month. This has been renamed Movember, and takes place to help raise both awareness and money to help support men’s mental health. The following celebrities all took part in this year’s event to support the cause. 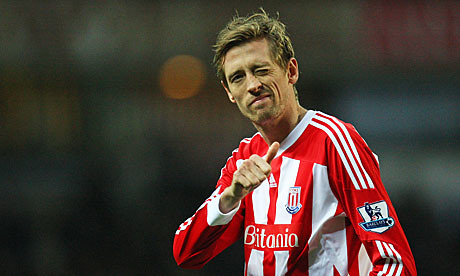 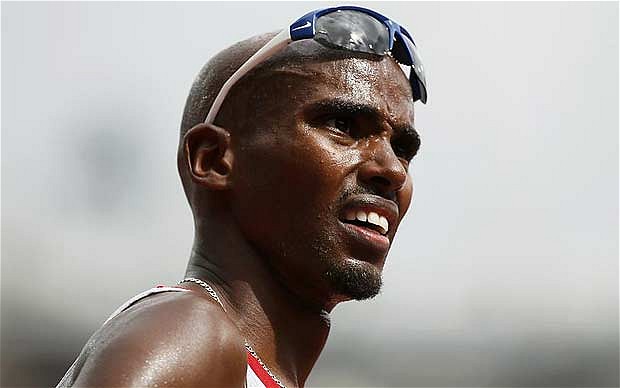 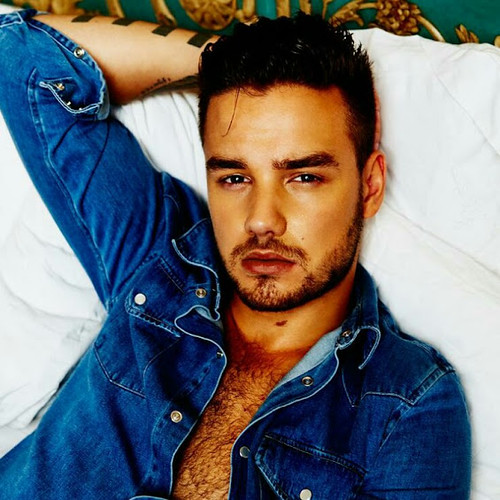 The Independent stated that they had found ’83 per cent of British men found it helpful when people ask is they are having a difficult time.’

Even a group of university students, who play for the University of Lincoln’s rugby club took part in the moustache season, raising nearly £4000. 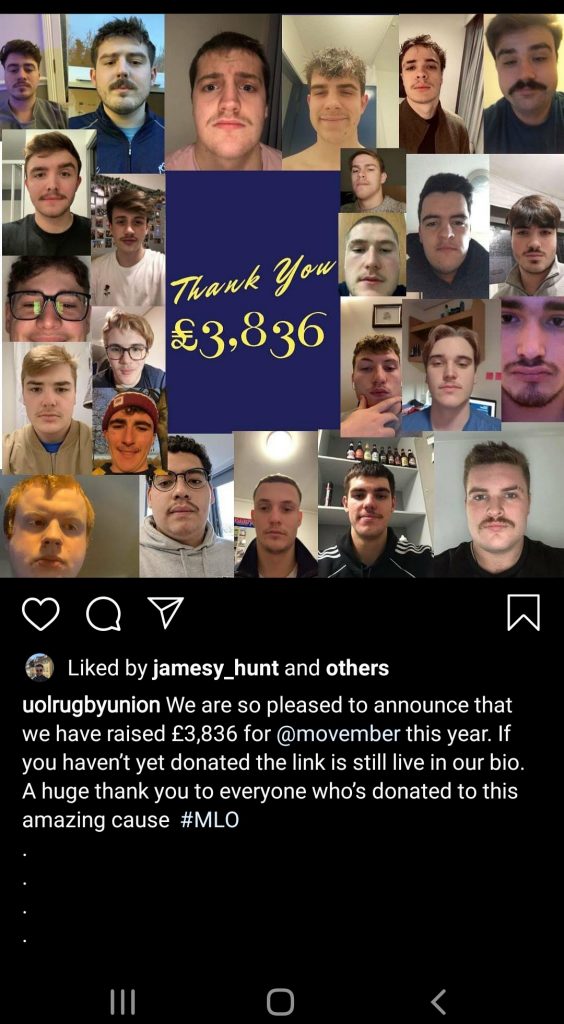 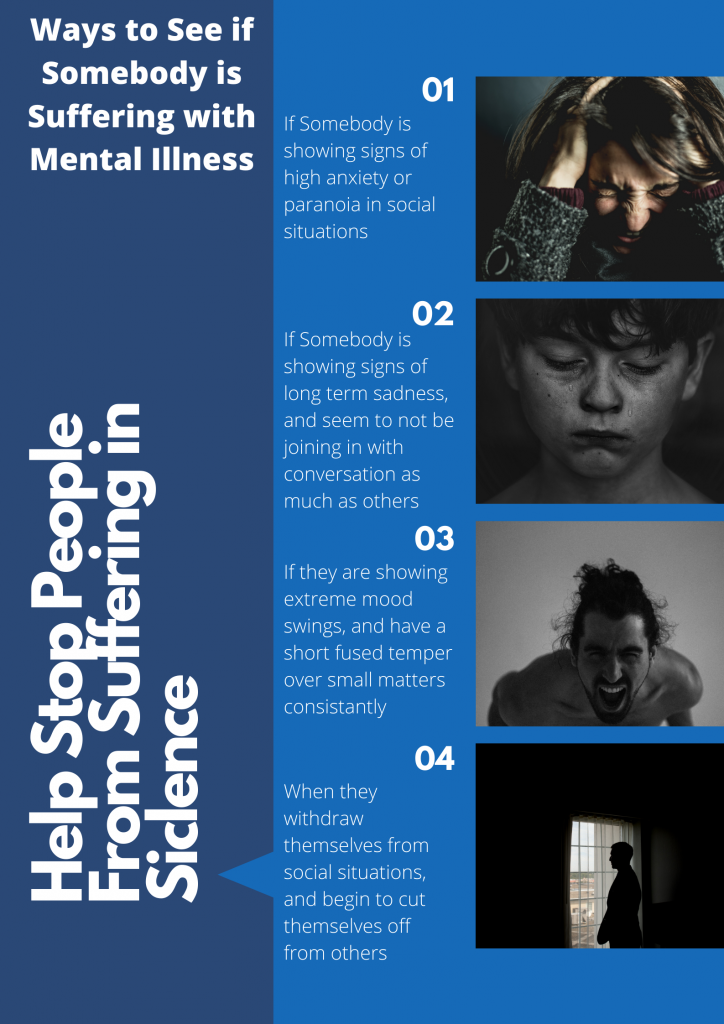 Mental health is nothing that can be pushed aside, even today we unfortunately still have the term ‘man up’ which is outdated within our day and age.

If you feel like you are struggling, then opening up to a close friend, or a loved one can have a very positive impact, as you have a chance to express yourself in a way that they haven’t seen, hopefully then being able to get some support during difficult times.

Similarly to how addiction works, admittance is the first stage, as men are known to not open up as much, being the reason why men’s mental health needs the awareness it does.

If there is nobody you feel that you are comfortable talking to, charities such as CALM (Campaign Against Living Miserably) and Samaritans both have call lines, as well as web chat rooms, to help ease the pressure off everyday life, and will listen to what you have to say.